As an avid hiker, explorer, and outdoor lover, living in a place like Saint George Utah can be overwhelming. Amazing hikes surround us here, to the point where even after fifteen years of exploring the area, I still get to find new adventures every year. The BLM wilderness Southeast of Zion National Park is a massive, wild, backcountry area full of slot canyons, 4×4 roads and mountain lion tracks. In early 2017 I finally stepped foot into this area to explore some canyons I had never seen before.

At Paragon Adventures, we always strive to give our guests a unique experience, and as some of the areas we use become more popular, we find new ones. For months, owner and lead guide of Paragon, Todd Goss, had his eyes set on a few canyons in this area as possible remote canyoneering routes for our guests, and the weather was finally warm enough to go see it for ourselves.

We drove to the trailhead and loaded up onto the Honda Pioneer: a 1000cc ATV that seats five people. Now the adventure begins. Riding on the soft sand is almost like boating over mid-sized waves, except on a boat, you don’t have to dodge trees and navigate the network of confusing trails, marked only by thin, brown, numbered posts, which are often impossible to read as Todd speeds past them at thirty miles per hour. Some trails were so narrow, we had to duck away from the edge of the ATV so as to not have our ears scraped off by the trees we swiped. 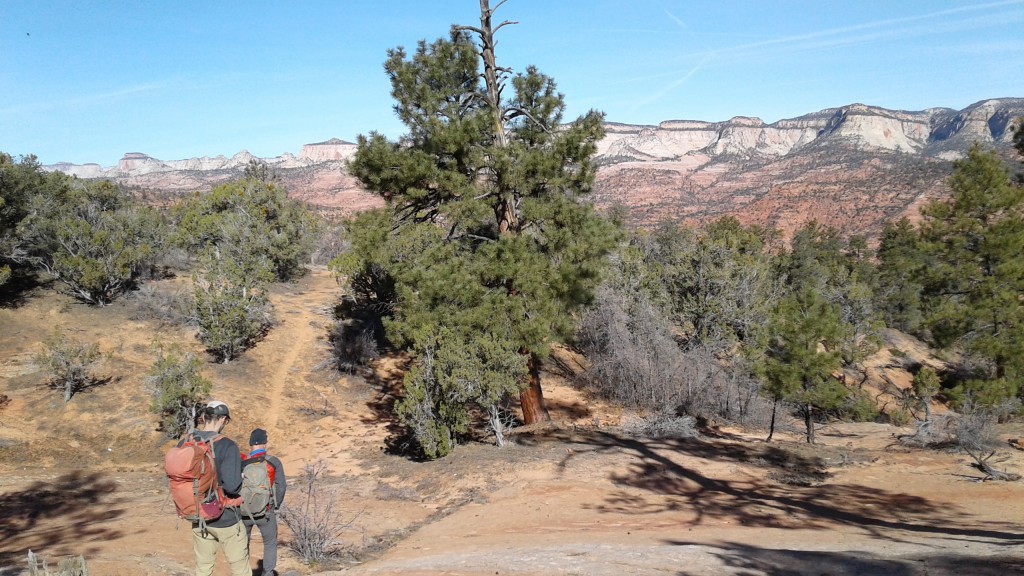 The hiking begins with seemingly boundless wild land in the background.

Upon finding the parking spot, we quickly hiked downhill through the sand, as the terrain gradually transitioned from heavily vegetated sand to sandstone. There was still ice on the ground, which, on such a steep slope, could have sent us on a long, fast descent to the bottom of the canyon, had we slipped on it. 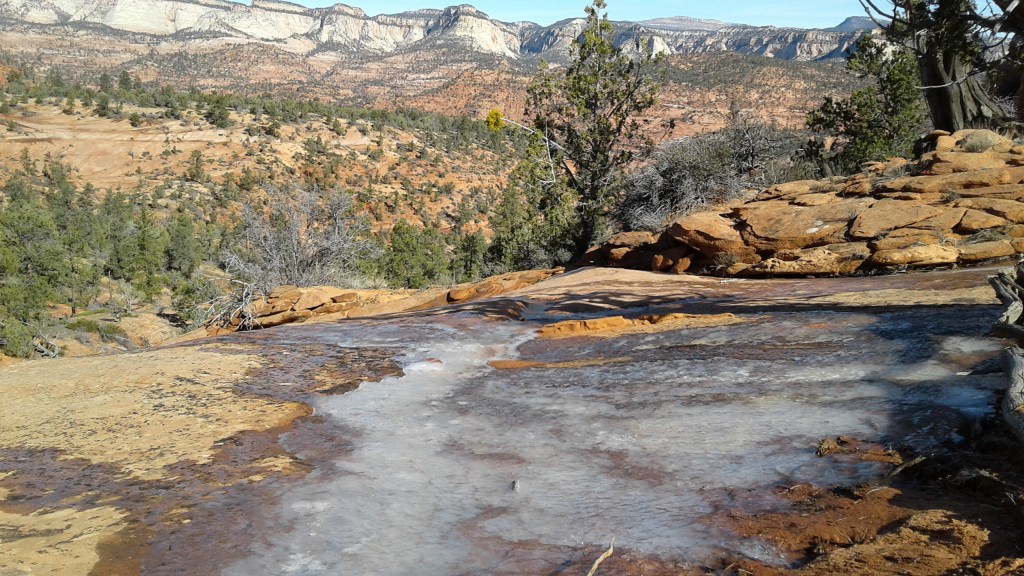 One of many slick steps along the beginning of our hike that could have sent us downhill really fast. 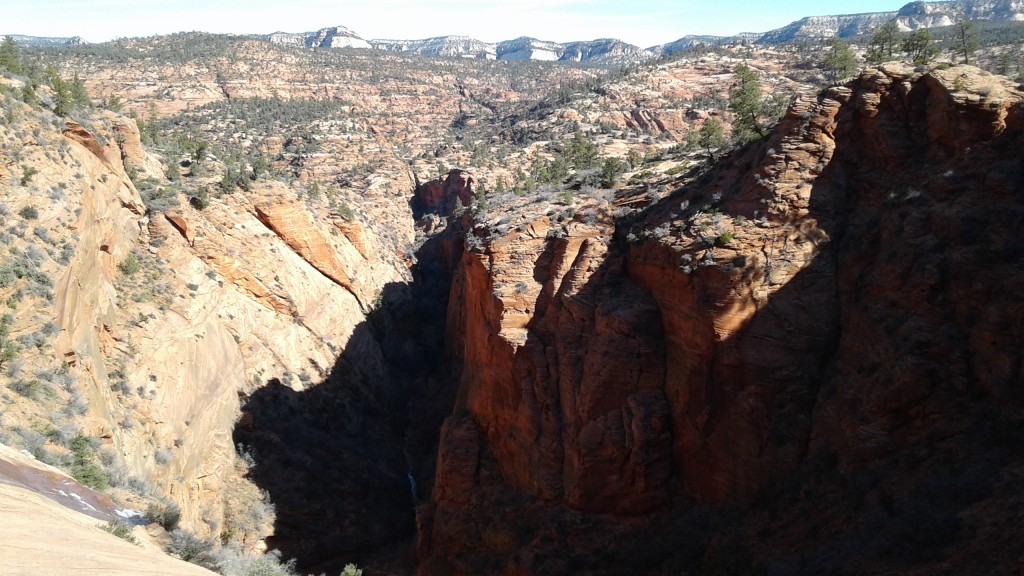 Our first sign that we were on the right path: French Canyon.

The drainage we followed turned out to be the exact one we hoped for: French Canyon. We reached a 200+ foot drop off with an incredible view of the Parunuweap river ahead. We found the only possible hike down and descended a steep trail full of loose rock and deer tracks. This was clearly the only way down without rappelling. At the bottom we looked up at the big 200+ foot wall we bypassed to see it had a sheet of frozen ice on its lower half. Todd’s expensive camera was immediately deployed and put to good use. 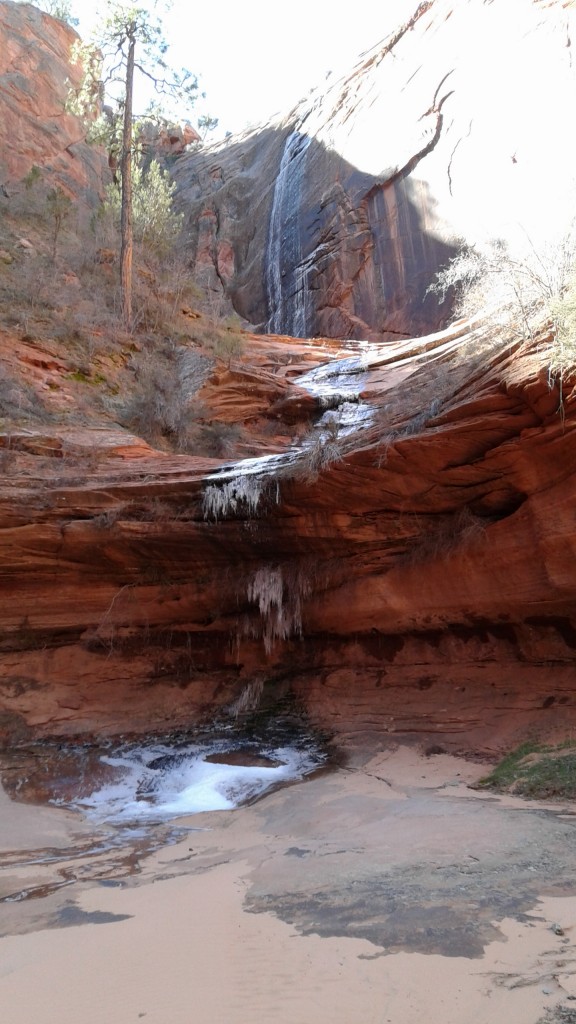 A short frozen waterfall with another one behind it, nearly 300 feet tall.

As we worked our way downstream through French Canyon, we quickly encountered flowing, clear water. We put on our wetsuits and canyoneering shoes. The first step into the shallow water was met with surprise and laughter as some of us sunk up to our knees in quicksand. Now, even more cautious than before, we passed through the rest of the thickly-vegetated canyon, marveling at the unique plants growing flat against the canyon wall, as if glued there. Even our guide we call “the Biologist” couldn’t identify this plant. 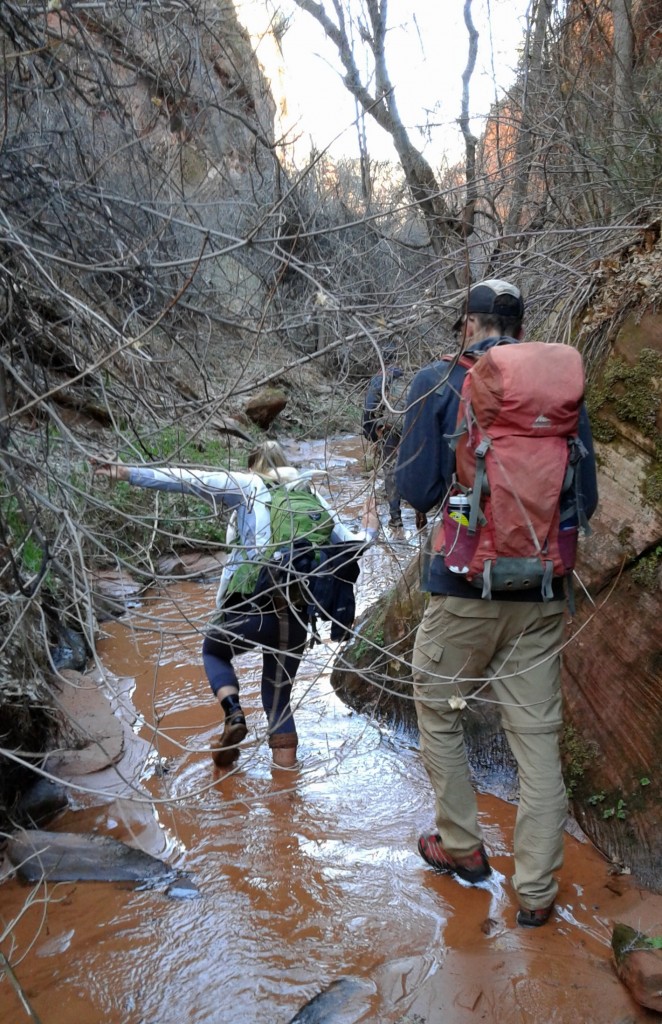 It felt a bit like stepping into a new world and the primitive side of my brain warned me to be on the look-out for dinosaurs and saber-toothed cats. The well-shaded canyon quickly ended at the Parunuweap river: a tributary of the Virgin River, and Zion National Park. It was flowing more heavily than expected. We tucked our cameras and phones into dry bags and began hiking downstream through waist deep water. This can be tougher than most would think. Three out of the four seasoned guides we had out there that day all fell into the water at one point due to not being able to see what we were stepping on in the murky water. This is good though, as it gives us something to laugh at throughout the day. 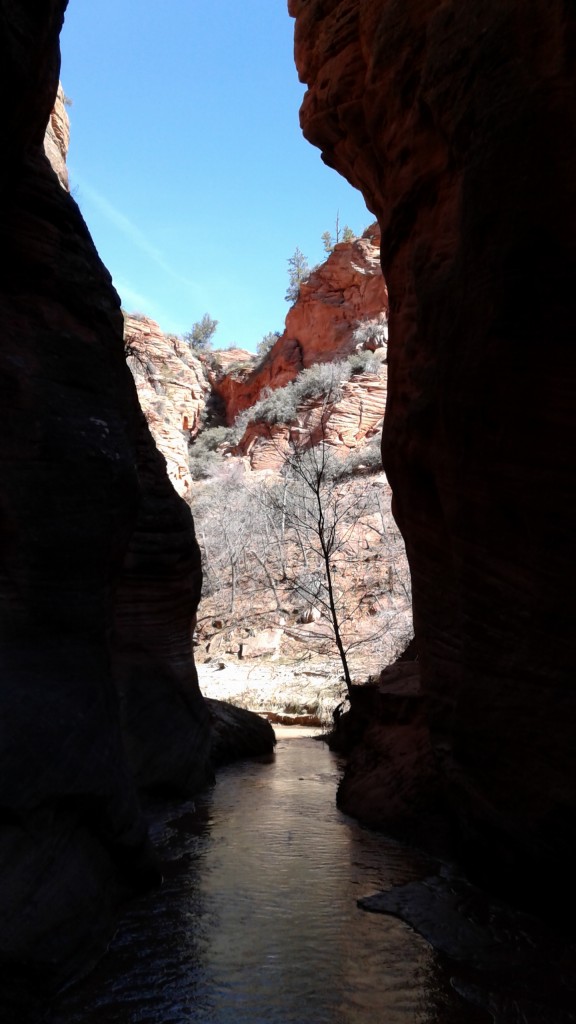 The end of French Canyon where it flows into the Parunuweap River.

Our goal was to get to the narrow and technical portion of the canyon, called Fat Man’s Misery: a famous slot canyon that is normally accessed through Zion National Park. Part of this canyon is not in the park, which means we could potentially obtain permits to guide it. We hoped to find the way in, through, and back out of this part of the canyon. After about three quarters of a mile through the deep, gorgeous canyon, which required countless waist-deep river crossings and a few unplanned falls/baths, we reached Poverty Canyon. This is another tributary canyon that feeds into the Parunuweap River, like Joe French Canyon and dozens of others. We hiked up the short, relatively-unimpressive canyon about a quarter mile until it suddenly became very narrow. Todd’s eyes lit up and again, out came his camera. These deep, narrow sandstone canyons are a nature photographer’s dream, especially with “canyon light.” This refers to the way sunlight becomes more and more colored as it reflects off of red and orange canyon walls on its way down to you at the bottom of slot canyons. We could easily have spent hours here but we had a goal. After several quick photographs, we moved along, back to the Parunuweap river.

We continued downstream, encountering a series of large mountain lion tracks that followed the river, and seemed to jump across in some spots where we would not, or could not…pick one. This was one big, bold cat that left these prints! We reached a spot where we could not go any further without some serious down climbing on wet boulders amongst rough waters. We decided this was not the time of year to be going through this section of the canyon. If it is too rough for us, then we would not be taking guests down it anyways. We would have to return when the river was lower, later in the year. We continued to eat snacks and make fun of each other on our long hike back to the vehicle, noting as we exited the water in French Canyon, that all the ice had melted. It would likely freeze again overnight. it’s fascinating to see how quickly things can change in nature if you just spend enough time out there.

We had seen three amazing canyons in one day, that most people never see in their whole lifetime. We had a world class adventure in our own backyard, and after re-ascending the long, steep hike out of Joe French Canyon and looking back at the network of slot canyons, slick rock, green trees and blue skies, I realized that I had barely even scratched the surface of this area. We had just explored one tiny hair on the head that is Southwest Utah. That’s alright. I like feeling small. We will definitely be back. Finally we reached the Honda Pioneer, changed out of our wet suits, and sipped cold water. As we climbed back into Todd’s powerful monster of an ATV, I thought “I better buckle up. This adventure’s not over yet!” and off we rode.

*If you would like to see some of the canyons mentioned in this article, feel free to call us or email us at Paragon Adventures.