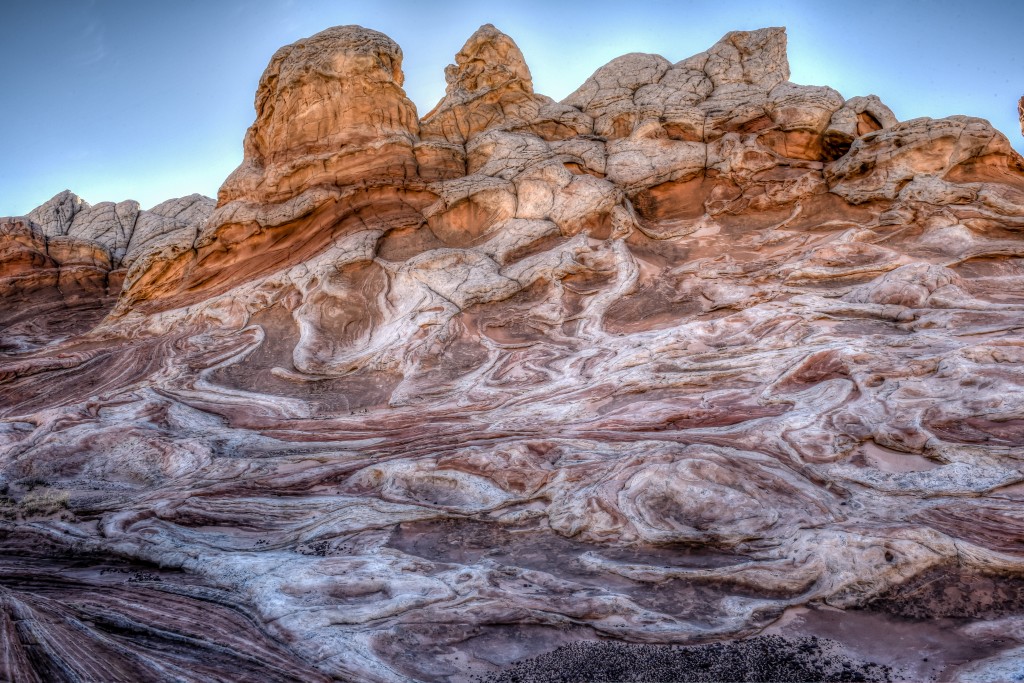 It is difficult to get the term “sedimentary chaos” out of my mind as I wander across the jumbled convolutions of White Pocket Arizona. The normal explanations for the colors, striations and crossbedding of the Navaho layer seem fantastically inadequate for the geological craziness that stretches off in every direction. It feels like I am walking around in an Escher painting and at some point I begin simply attributing everything to leprechauns and stop trying to imagine how all this rock got so geologically befuddled, which is not to say that the amazement factor is diminished in any way.

White pockets is a long way from nowhere, and mid February road conditions start at terrible and degenerate from there.  Turning off of highway 89A onto House Rock Valley road is a transition of time traveling proportions, from the predictability of 21st century asphalt to the frozen rutted clay of the 1850’s. Nine miles never seems very long at highway speeds, but when your head is being smashed into the driver side window with regularity, it makes me realize that thirty miles per hour is actually pretty damn fast after all.  Turning off onto the “sand roads” of the Paria Plateau are actually a relief until I realize that the violent bashing has simply been replaced with being sucked into the earth, as we traverse through the softer portions of the “road”.  So the stress of being bludgeoned is simply replaced by the stress of being buried alive. 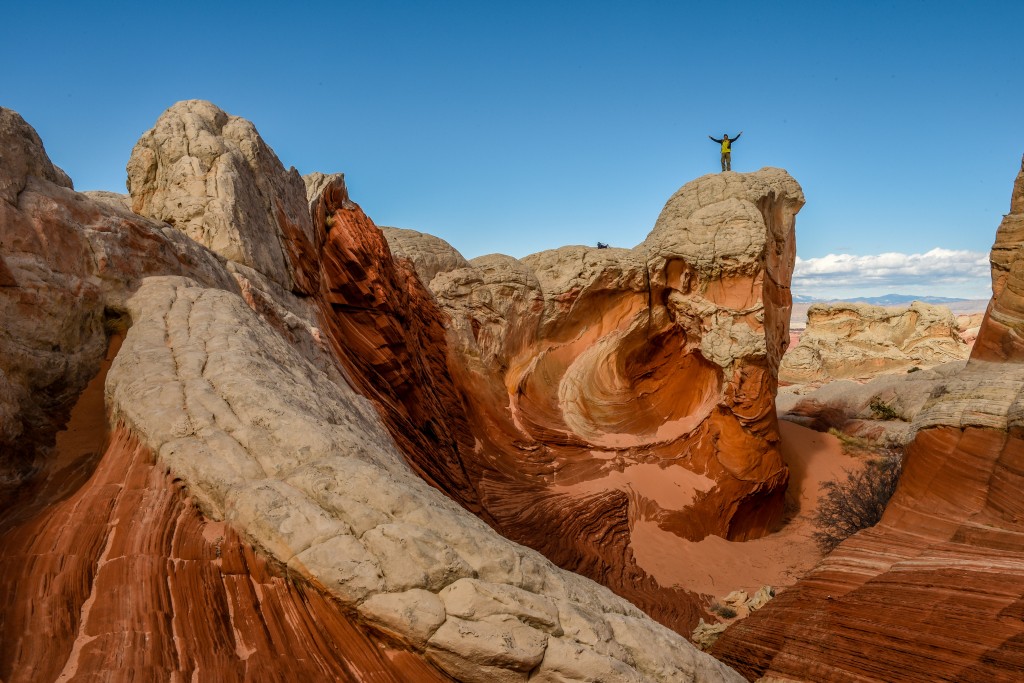 Fio Antognini standing in for the big guy in white pocket

Arriving at the combination parking / camping area of White Pockets is both a stress relief and anti-climax at the same time. Perhaps I am jaded from twenty five years of tramping around some of the more remote and spectacular corners of the region, but at first glance it does not really live up to its billing, and I begin to regret the punishment that both body and vehicle have endured in getting to what appears to be basic blanched polygonal sandstone dune deposits that are easily visible, and with far less travail, five miles from my house. A brief stroll through the barrier sand dunes leads onto a lichen speckled, white gray sandstone that rises towards a ridge. Here my usual expectations are simply decimated, as the boring wash that I expect to find on the other side is actually a small valley simply alive with a universe of inexplicable stripes, swirls, whirls, and some kind of geologic marbling that resembles nothing more than a fine steak. While I am visually overloaded and stand slack jawed at the sweep of color and texture extending in 3 directions, the silence that this landscape lies steeped in, gives it a sense of drama that no theme music could improve on. A frenetic landscape marinated in a stillness so complete that the blood running through your ears becomes so obviously audible that you begin to wonder if others can hear it as well. 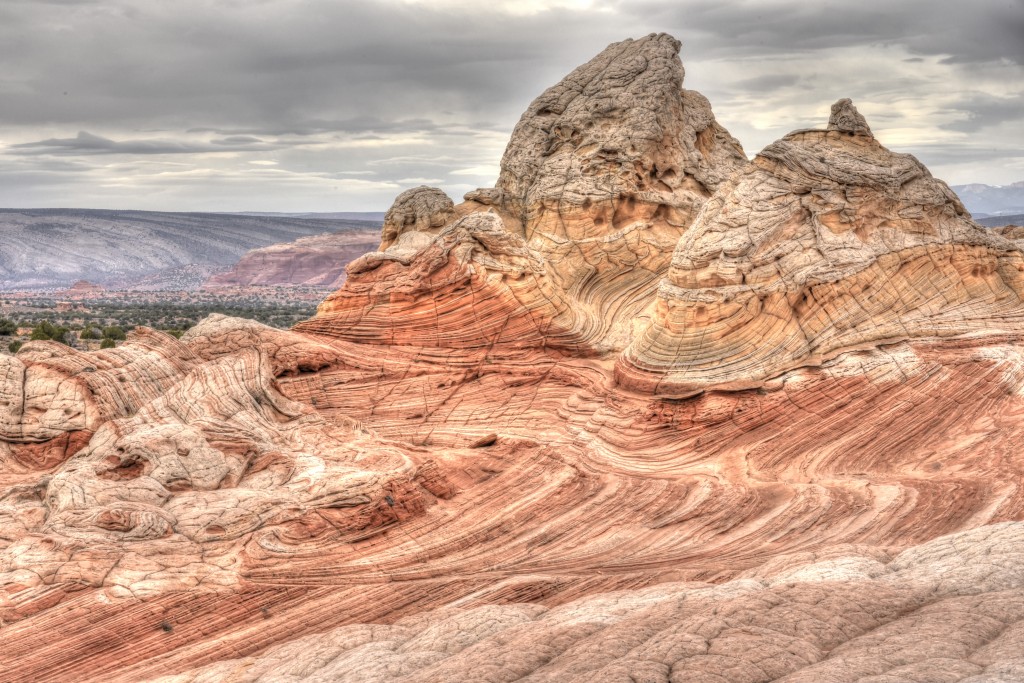 The desert southwest is renowned for landscapes that epitomize the word “grandeur” and yet so many of these are vast vistas which the human mind is ill equipped to grasp, the prime example of which being the Grand Canyon.  White pocket is intimate and intricate with few areas so steeply inaccessible that human fingers have yet to caress the textured stone, and offering a new delight around every turn.  It is an area that lends itself to an aimless saunter across bowls, through drainages, over ridges and around reflecting pools of water in the right season, the fringe of soft sand lapping against the edges of stone like waves at the shore. 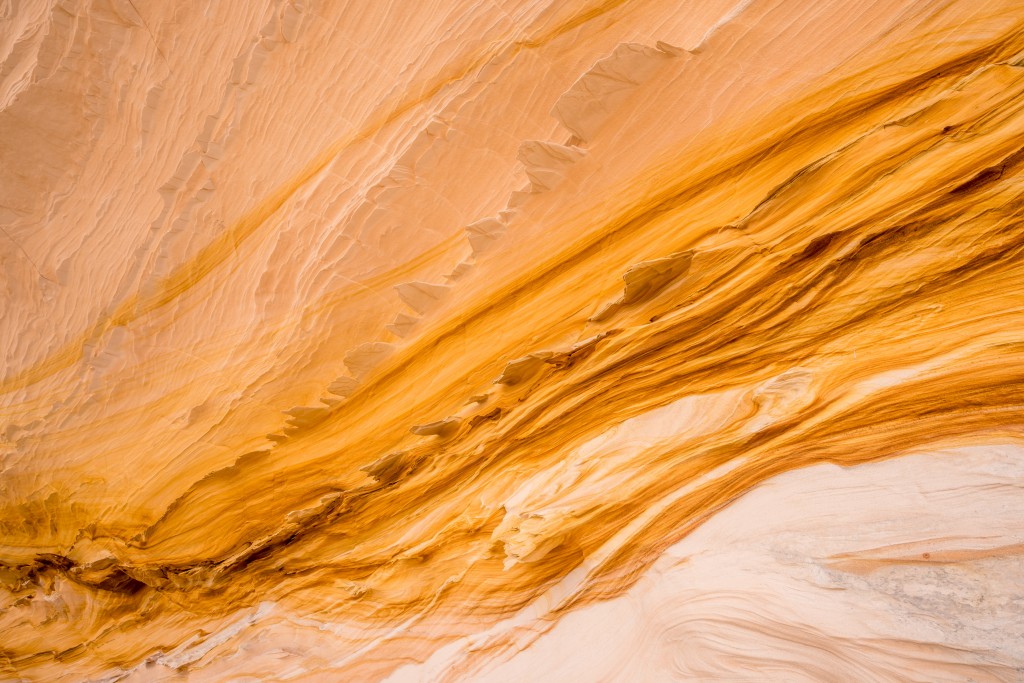 Venturing out on the surrounding sea of sand, landfall is made at the surrounding mesas that rise as islands of color and texture. Switch backing up the millennia is to follow a rising seam of deposited stone, eventually moving to the next younger cross bed in a new direction, climbing an exposed slope in the process. The north end of the seemingly insurmountable White pocket mesa is approachable with this technique, and with each foot of elevation gain new wonders begin to reveal themselves. Pristine piles of sand lie in the wind shadows next to deep pools of winter rain. Alcoves hide multi hued bands of gnarled and eroded stone fins with so many variations on the color of gold, that an actual nugget would be unnoticeable, and comparatively banal. Few places offer this wealth of wonders in such a compressed area, and are still free from the odious permits, online lotteries, group size limits and law enforcement typified by the popular Coyote Buttes areas to the north.

It is worth hoping that the difficulty of the driving approach through the deep sand will continue to leave White pocket as a place that attracts a kind of explorer looking for the less traveled and untrammeled. 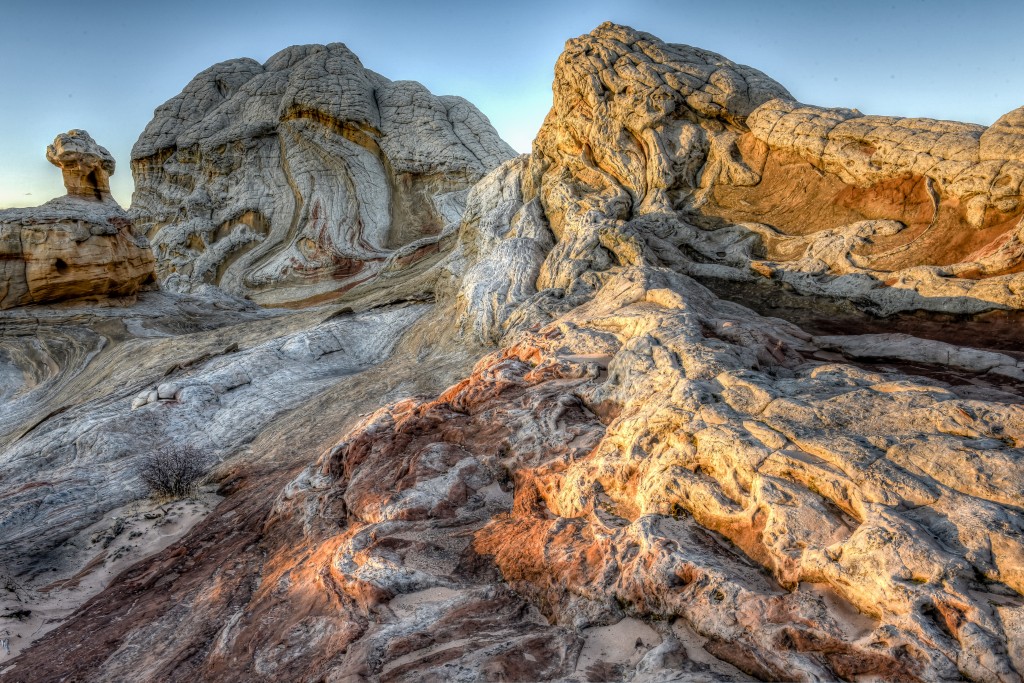 Directions:  Best approached from the south via highway 89A  turn onto house rock valley road and travel north for 9 miles to road 1017 (there is a coral near this intersection)  Follow 1017 for 6.1 miles (going around the ranch house in the middle of the road) and turn left onto 1087. stay on 1086 for 9.3 miles to the parking and camping area on the left.

Roads:  The soft sand roads necessitate 4wd and good tires. Lowering your tire pressure may permit passage when the surface gets deep. Consider a means of re-inflation afterwards.

Preparedness:  No services, no gas, no water,  no cell coverage,..nothing. Bring everything that you will need. 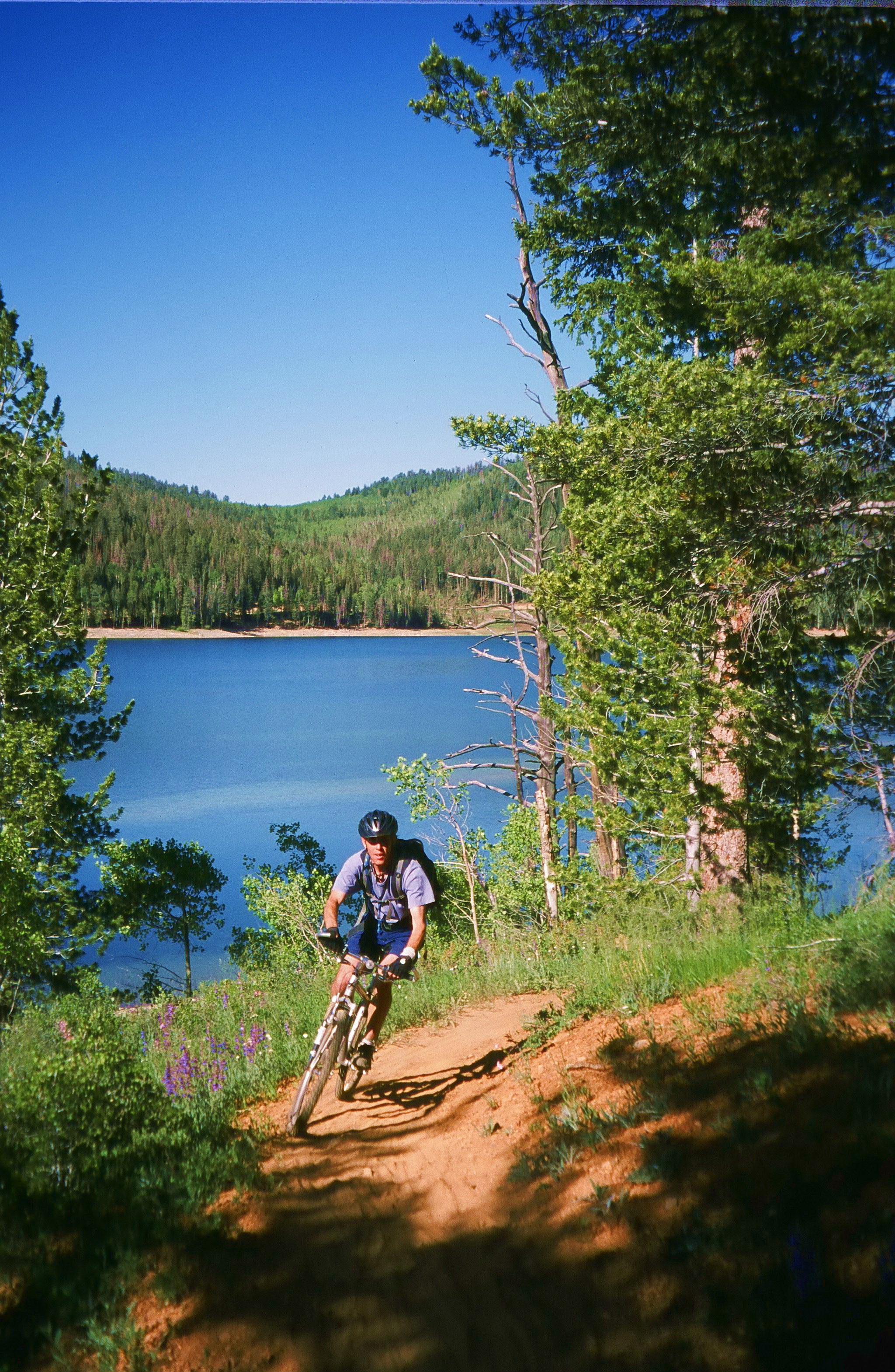