It is why you come here

Landscape is what brings people here, and landscapes are what bring them back.

Southwestern Utah is comprised of a staggering variety of landscapes, from iconic red rock vistas right out of a spaghetti western to vast flows of basalt so recent that it is surprising that it isn’t still warm.  Mountains, canyons, ridges, cliffs, mesas, and buttes punctuate the skyline in every direction, and springs and streams create an unexpected lushness underneath it all. Saint George Utah is truly unique and every square mile is different from the last mile.

The town of St. George itself sits in a basin surrounded by mesas and small plateaus of various geologic composition. The red cliffs of a 60,000 acre conservation area to the north and east are matched by a rise of Shinarump sandstone ridges and buttes to the west as the city boundary transitions into open public lands of one form or another. The basin itself is relatively open to the south and only the imaginary line of the Arizona strip keeps the city from growing further in that direction.

Most visitors to St. George comment on how new everything looks. This is partially due to waves of construction booms as well as the preservative effect of the desert environment itself. Pioneer homes of the 1890’s are often still in habitable condition with little to no renovation necessary. The winter home of Brigham Young has been well cared for by the LDS church, and in any other town would have been turned into a trendy pub or upscale restaurant;  just as the home where he kept his wives, across the street, has been turned into a bed and breakfast. Both of these structures lie in the heart of a small historic district centered around Main Street and Tabernacle, and bounded a block or two both north and south. The historic courthouse, and tabernacle are built out of locally sourced red rock, and stand out among the remainder of store front buildings that range in age from pioneer to recent.  A few blocks to the south the brilliant white LDS temple was built on pilings driven into the marshy ground with a Napoleonic cannon used a battering ram. Photos of the era show it way out on the outskirts of town, with little beyond except the willows and marshland of the confluence rivers. Today it is often the first structure that the eye is drawn to both for its brightness as well as its religious architecture, and is an immediate reminder of Utah’s unique heritage.

The natural landscapes of the area in and around St. George are as varied as they are due to the fact that 3 desert regions meet and merge here.  The town itself sits at the far eastern edge of the Mojave Desert with the prevalence of creosote bushes as evidence of this face in any ares close to town. Travel fewer than 10 miles to the north, and the creosotes begin to give way to big sagebrush and eventually the pinon and juniper forests of the Great Basin desert, which dominates the remainder of the western part of the state all the way to southern Idaho.  Looking to the east of town the view is dominated by a series of flat topped mesas that define the western edge of the Colorado Plateau. This vast area of slick rock and high altitude forest is home to many national parks and monuments as well as numerous wilderness areas of deep canyons and perfect silence. 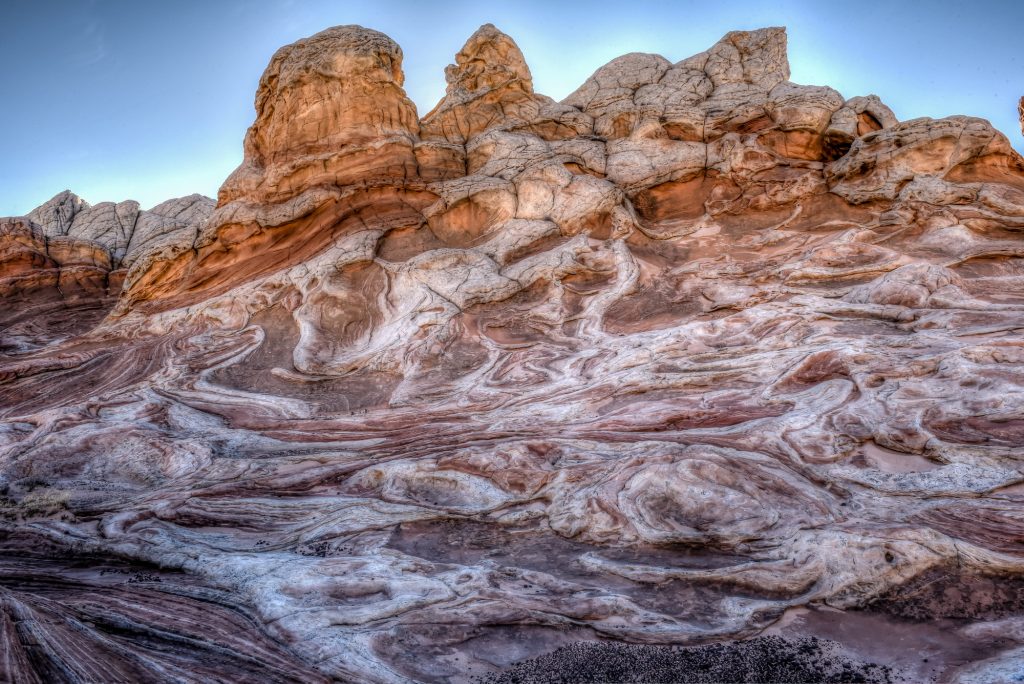 Convoluted rocks at the White pocket area near the Wave.