A world of different stone types

As a location for the pursuit of rock climbing Southwestern Utah is hard to beat. One look at the quantity of exposed rock that surrounds the town of St. George makes most climbers hands begin to sweat in eager anticipation of moving up a line of perfect vertical features. A broader look at the landscape from an even wider view reveals a variety of rock types, climbing styles, elevations, environments and sun exposures that is unrivaled in the world. To all of this add in over 300 days of climbable weather a year and you have one of the best climbing destinations on the planet.

Most places that are considered destinations for rock climbing feature one primary cliff band, landscape feature or rock type. Think about Yosemite valley, El Dorado Canyon, Joshua Tree or Smith Rocks. These areas may offer hundreds of developed routes, but all on the same rock features and often of the same climbing style, yet they draw climbers like flies to a carcass. Standing in line is what most people travel to get away from, and queuing up to do a particular route is not high on any climbers wish list. Additionally a large enough group of grubby road tripping rock climbers qualifies as an environmental hazard at least, and a potential superfund site in extreme cases,… (Tonsai Beach in Thailand.) 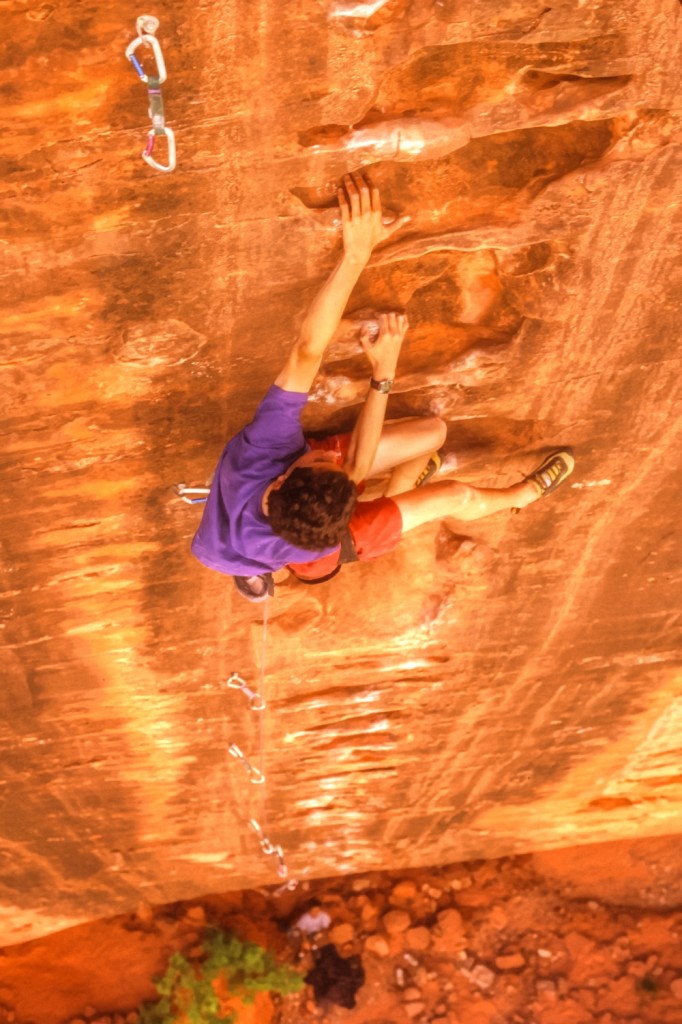 By contrast, Southwestern Utah offers numerous scattered crags within a 100 mile circle drawn around St. George. Some of these offer as few as a dozen routes, most feature several days worth of developed climbing, while others like Zion national park are a world all to themselves, where several lifetimes would not suffice. What the development of many small areas over a large region really adds up to is a very low level of other climbers at most any crag that is visited, as there is not any single area for everyone to flock to. Seasonal exceptions are to be expected with the warm and sunny low elevation areas gaining popularity in the winter, and high elevation refuges from the heat seeing summer traffic.

What Southwest Utah may lack in cultural diversity is made up for in the variety of rock types that exit here and climbing styles that are practiced.  Sandstones, limestone’s, basalt, welded tuff, conglomerates, and granites are all to be found within decent driving distances from town, and some of it within walking distance from Main Street.  While bolt protected sport climbing is what attracts most visitors, the region also features a nationally recognized bouldering area, several traditional climbing locations as well as the big wall aid and free routes of Zion Park.

While the variety of rock types and climbing styles are wide ranging, it is the differing environments where all this climbing takes place which astounds most first time visitors.  Three of the five desert environments in North America are to be found within 20 minutes drive from St. George. The Mojave, Great Basin, and Colorado plateau ecosystems all merge together just here, meaning that you can climb limestone in Joshua trees in the morning, pull on Navaho sandstone up in Ponderosa pines before lunch, and finish the day on welded tuff near an alpine meadow. The elevation range of established climbing areas is from 2000 feet above sea level in the Virgin River Gorge to nearly 11,000 feet at the Overlook area in Brian Head, with a driving time between the two of under 2 hours, and a temperature difference often over 50 degrees between these two extremes. There isn’t a season where the skin on most peoples fingertips will stand up to the number of climb-able days. 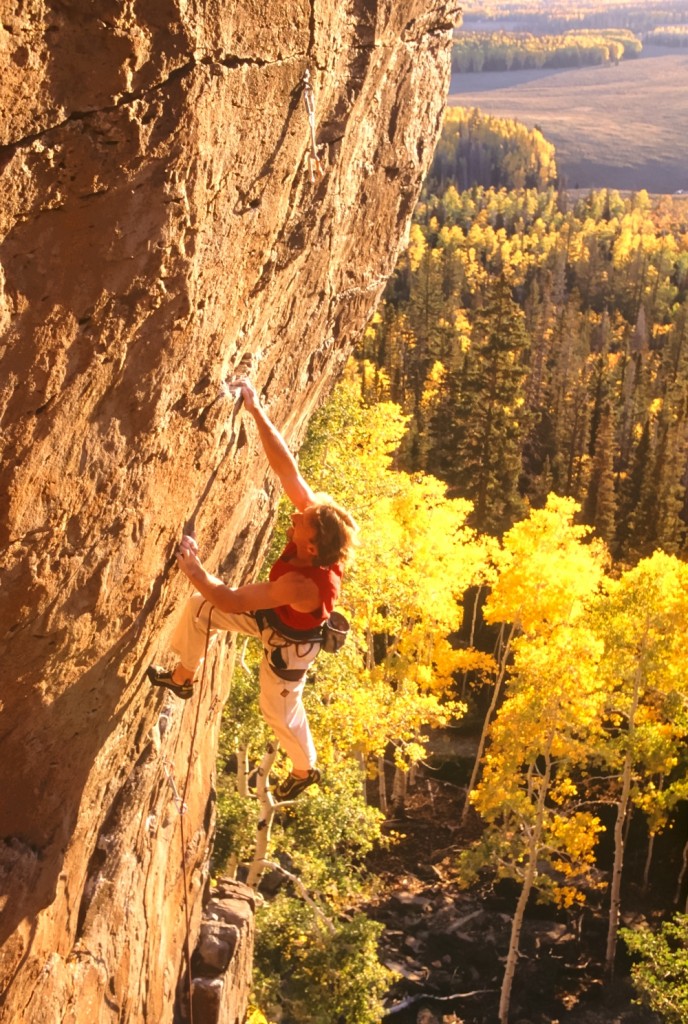 There are perceptions of the state of Utah that keep many climbers away, some of which are more reality than others. Rainy day activities or rest day pursuits here are often a challenge to the imagination or tolerance for the excessive wholesomeness’ that Utah is famous for. Night life is for the most part non-existent. St. George is a family oriented retirement town with perhaps the highest ratio of golf holes to population in the nation. Combine the retired population with the statistic that Utah is per capita the youngest state (large families) means that we have a population curve that is skewed to the very young and very old, which is reflected in the services that the town is based around (buffet restaurants, and playground parks)

Yet non climbing activities abound for both the recreationalist and resting. Hiking opportunities are limitless both near and a bit further afield in Snow Canyon state park, and Zion national park, not to mention the miles of trail in the Red Cliffs National Conservation area, and Santa Clara River reserve. Numerous coffee shops, movie theaters, restaurants, and shopping opportunities abound. Outdoor theater is available seasonally at Tuachan, with a Shakespearean festival about 45 mintues drive away in Cedar City.  Adult activities, casino gambling, and off site betting services are kept just over the Nevada border about 30 minutes away in Mesquite.

Climbing, camping, canyoneering, backpacking, and outdoor equipment is available at our local climbing shop The Desert Rat. This is also the place to purchase guide books and get the most up to date information on the outdoor opportunities that the region offers. The staff are local experts in some of the best off the beaten track places to visit. 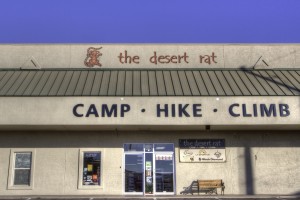 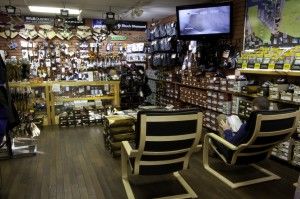 Best route: Sandstoner Reverse 5.12a  One of the few routes on the south side (north facing) side of the canyon, Sandstoner is a relentless jug haul up a beautifully overhanging wave of Shinarump sandstone. One of the first routes in the canyon it was bolted by youthful Casey Anderson and Todd Perkins with the drill running in the wrong direction. 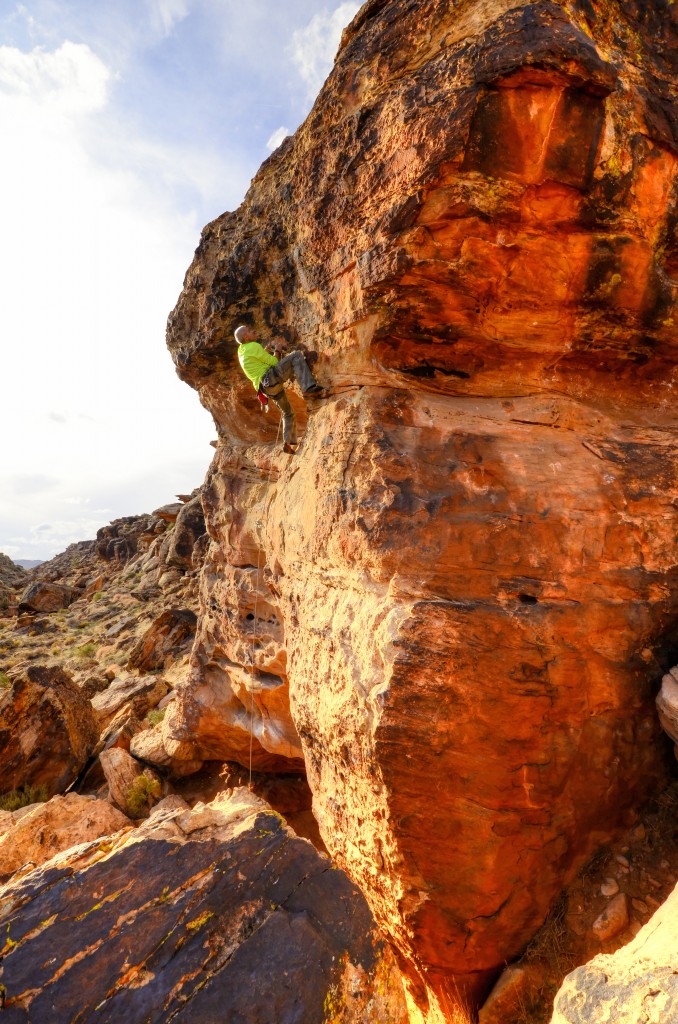 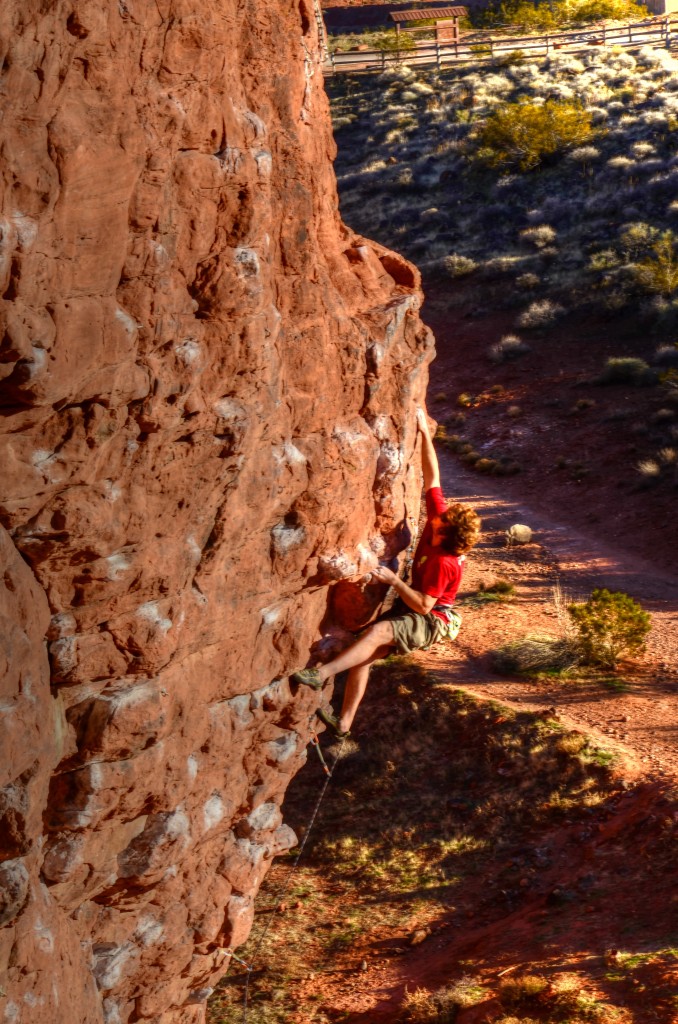 As a quick fix for getting some blood flow through your forearms, Chuckawalla is hard to beat. Literally within the city limits, the approach is measured in seconds instead of minutes, and the down hill hike ends at a 50-60 foot cliff packed with routes. It is true that if Chuckawalla where any less accessible we would never consider climbing there, but this highly featured cliff of Kayenta sand / mud stone has for years been our local outdoor gym.

Pockets up ever steepening wall of pockets. Pull overhang at top, stand up and clip the chains 5 bolts 45′

Slopers on overhanging stone to rest then jugs on prow to chains. 6 bolts to anchors 50′

Body tension through scoop and small pockets, then jugs and rails to the chains. 6 bolts 50′ 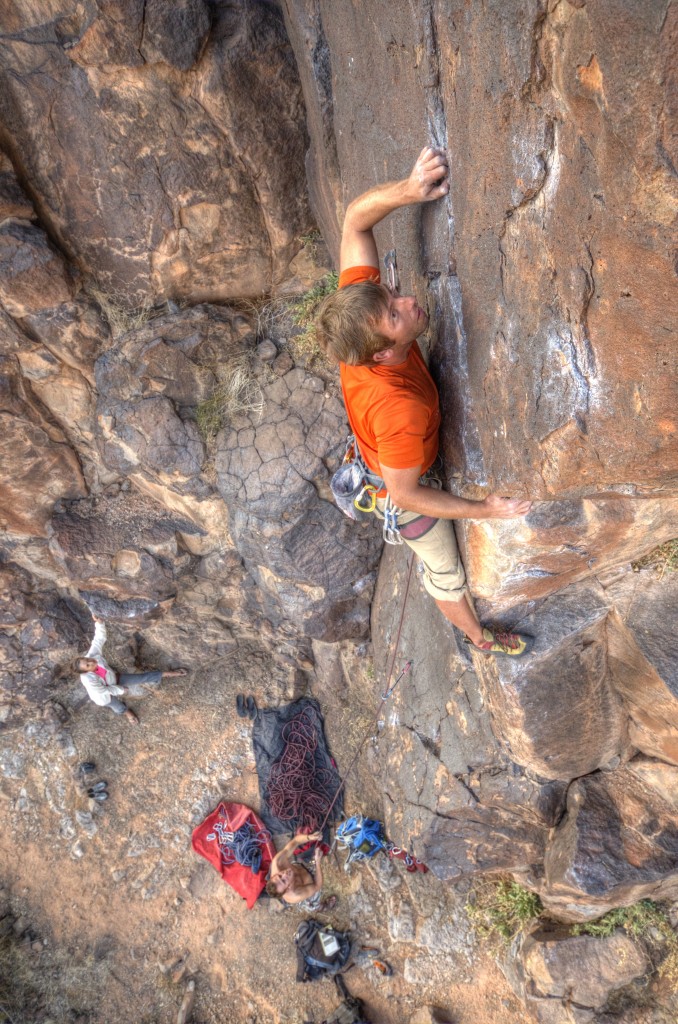 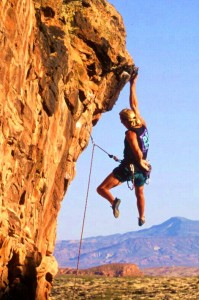 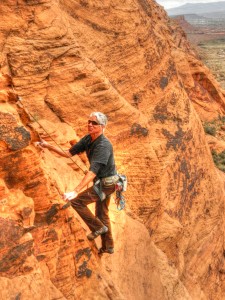 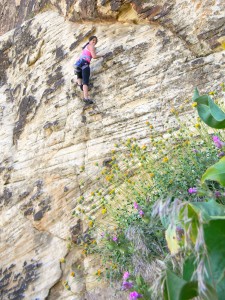 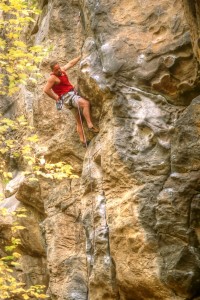 Sparkle and Fade 5.11a at Crawdad Canyon rock climbing park 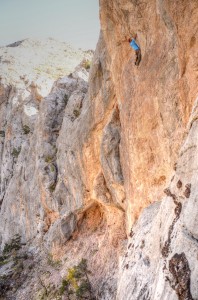 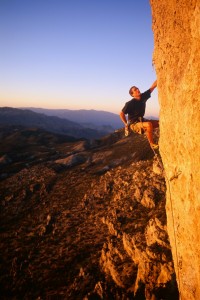 Todd Perkins on the Power of D 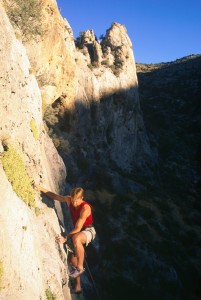 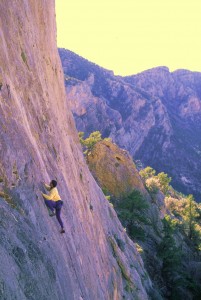 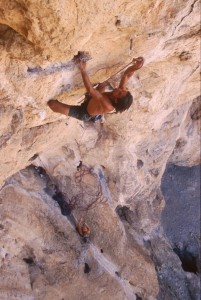 worhsiping the limestone gods 5.11b the cathedral utah 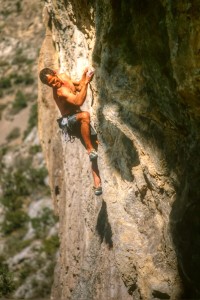 rock climbing on Heretic Wisdom 5.12a the Wailing Wall 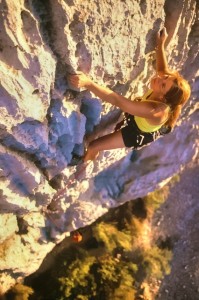 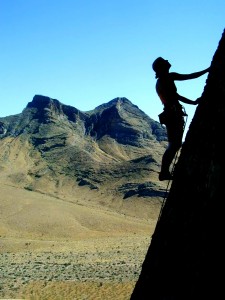 Choli Ence on Eves testicle 5.11b 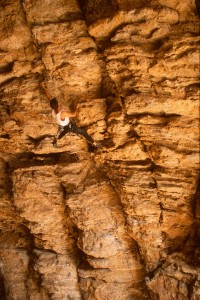 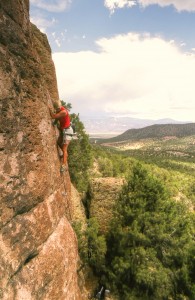 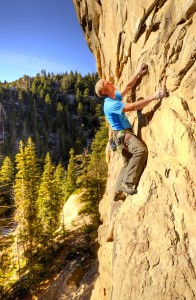 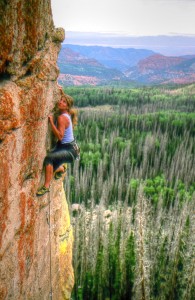 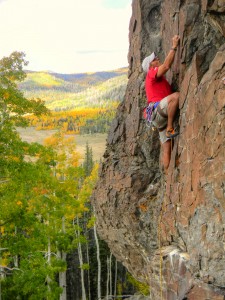 climbing the dogs bollicks 5.10c at the running scared wall 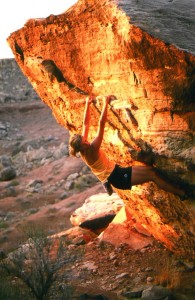