Squeeze through an underworld

There are many small caves in the St. George Utah and Arizona strip area. Most of these are very hard to find and few are worth the 4-wheel drive trek. The two caves that are easily accessed and recommended for recreation are The Bloomington Cave of the St. George BLM and the Lava Tubes of Snow Canyon State Park.

Please be safe: Always bring at least 3 sources of light and proper foot wear with closed toes. Many people try to enter in sandals with only a cell phone as a light.

Follow all laws: For some reason, caves tend to attract people who litter. Litter and graffiti are the biggest threats to our access to these caves. The BLM and Snow Canyon State Park could both close off these caves if they are abused or mistreated.

Snow Canyon State Park features one small cave in the lava along the Lava Flow Trail. It is only approximately 1/2 mile past the trailhead on the north side of the park. The cave itself is small, has a difficult entry, a low ceiling, with a rugged floor, but opens into a large room at its end. It is a unique feature in a canyon of red rock mountains. There is an information sign at the mouth of the cave. There are a few spots that look like they may be caves but they are only alcoves. The lava tubes are at the sign along the trail.

In a desert like St. George, where night time winter temperatures can freeze water and summertime heat can cook eggs, it is a great haven to be able to crawl into a cave where the temperature is a steady 58° F all year. At times it actually rains here as well, and in all but the hardest downpours this cave remains relatively dry. Though its first visitations were in the early 1900’s, the Bloomington cave was extensively explored and mapped by local avid cavers in the mid-2000’s, with the recording of approx. 1.3 miles of passages.

We will not lie to anyone about this cave system: this is not your Grandma’s cave! It is narrow, sharp, uncomfortable, and, to some, it’s down-right scary. Obviously, if you are claustrophobic, then you don’t want to go into a cave, especially one like this, in which you can only stand up and stretch occasionally. Even some of our toughest guides have said they never want to go back in there. The other half of us found it adventurous and rewarding. We are the first and only guide service to have permits to guide in this cave. If you go with us, we have a 100+ foot rappel available within the cave. We know some routes in here that are so tight that not everyone can fit. Some can make even the bravest explorer shiver. Please visit our main website to schedule a trip with us to this cave.

Rappelling our 100+ foot rappel in the Bloomington Caves

The Bloomington Caves are made of Limestone. This cave is rare because most limestone caves were formed by fresh water flowing through the limestone and slowly dissolving parts of the rock until it creates a cavity, or cave. This cave was not formed or significantly shaped by water. The rock here shifted during seismic movements and pressures (earthquakes and plate tectonics) to open a fracture in the earth. There are two entrances where this fracture meets the surface, allowing us access. Its deepest recorded point is 240 feet below the parking area. This is not the kind of cave in which you will see a myriad of colorful crystals, but to those who appreciate geology, there is still something here for you. The water that has flowed through the cave since its creation has deposited calcite and gypsum on the walls, ceilings and floors. Though many have been broken, you can still see plenty of stalactites, stalagmites, and soda straws from this mineral deposition. Also, within the limestone, those with a keen eye can find several small ocean fossils along the routes, embedded in the walls and ceiling. Most of these are a form of mussel shell fossils.

Though mostly dry and barren, the Bloomington Cave is home to many species, some of which are a special sub-species found nowhere else in the world. Local snakes and pack rats have been known to seek shelter in the cave entrances. Beyond that, bats, spiders, wind scorpions, millipedes, salamanders and cave crickets dwell. 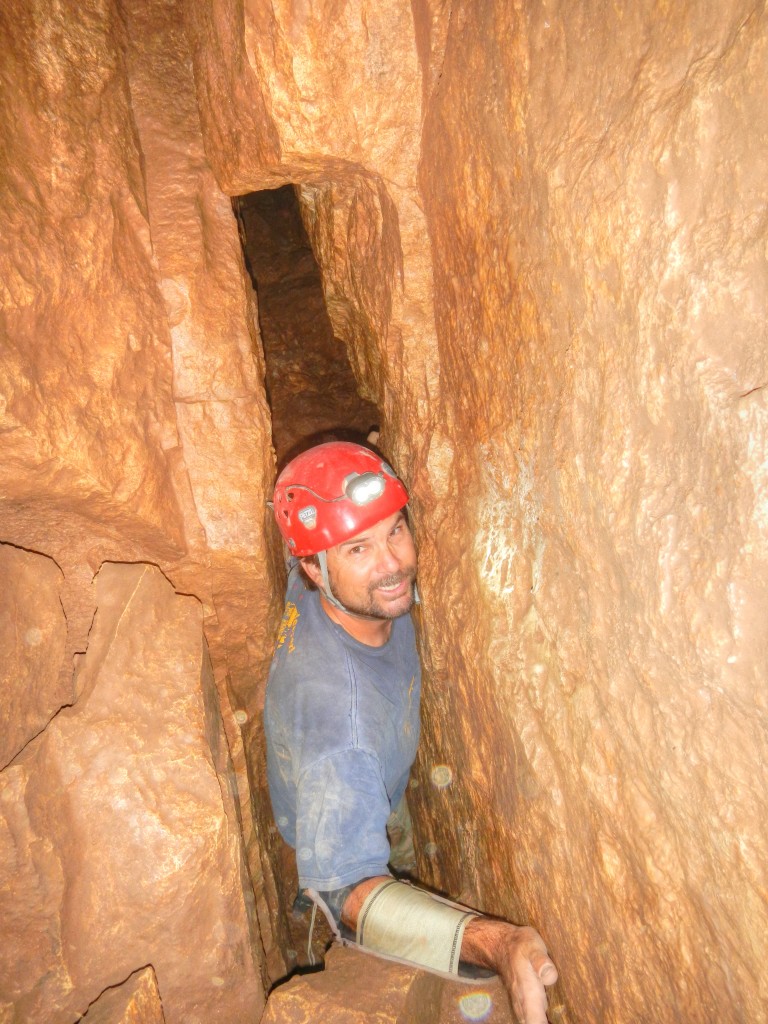 Kyle Voyles, of the BLM, a rare species of human/mole squeezing his way through a narrow section of the Bloomington Caves.

In the late 90’s, Kyle Voyles with the BLM was mapping the cave and stumbled upon a native American axe head. The BLM did not get to date this artifact but it proves that the human use of this cave could date back thousands of years. Since native use, the cave has been visited by American pioneers and miners as early as the 1890’s. Many mines used to operate in the hills around the Bloomington caves and some of these miners, already equipped for caving, would explore this natural cave system for fun and adventure. Some of them burned their names into the cave walls with their open-flame lanterns and candles. By the 1950’s, some people deemed it unsafe and convinced the county to blast the cave entrances shut. Locals removed the blasted rock and continued to explore the cave until it was blasted shut again. Eventually it was left open and continued to gain popularity with locals. Over the years, though, spray paint and broken bottles accumulated along with much unnecessary garbage and the BLM organized a massive cleanup, which involved sandblasting away much of the spray paint graffiti.  Steel gates were also installed at the entrances to control/monitor visitation through a permit system that provides daily access. 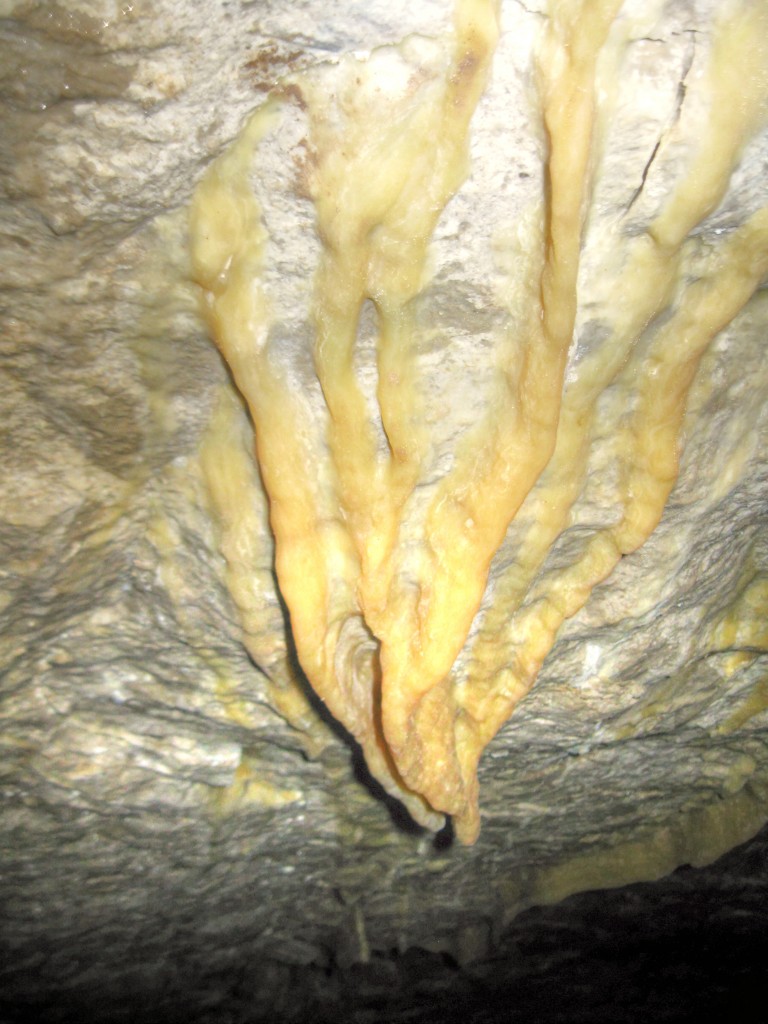 Unique shapes form in the mineral deposits within the Bloomington Caves

1.3 miles of rough trails are well-mapped and marked by brightly color-coordinated tape hanging from the ceiling above. Simply choose a trail, or combination of trails, and follow the appropriately-colored tape for that trail. (Example: green trail=follow green tape)

This cave is accessible, but permits are required. We fully respect and support our local BLM office and to avoid contradicting their regulations, we will recommend you to their website for directions, permits and cave etiquette.