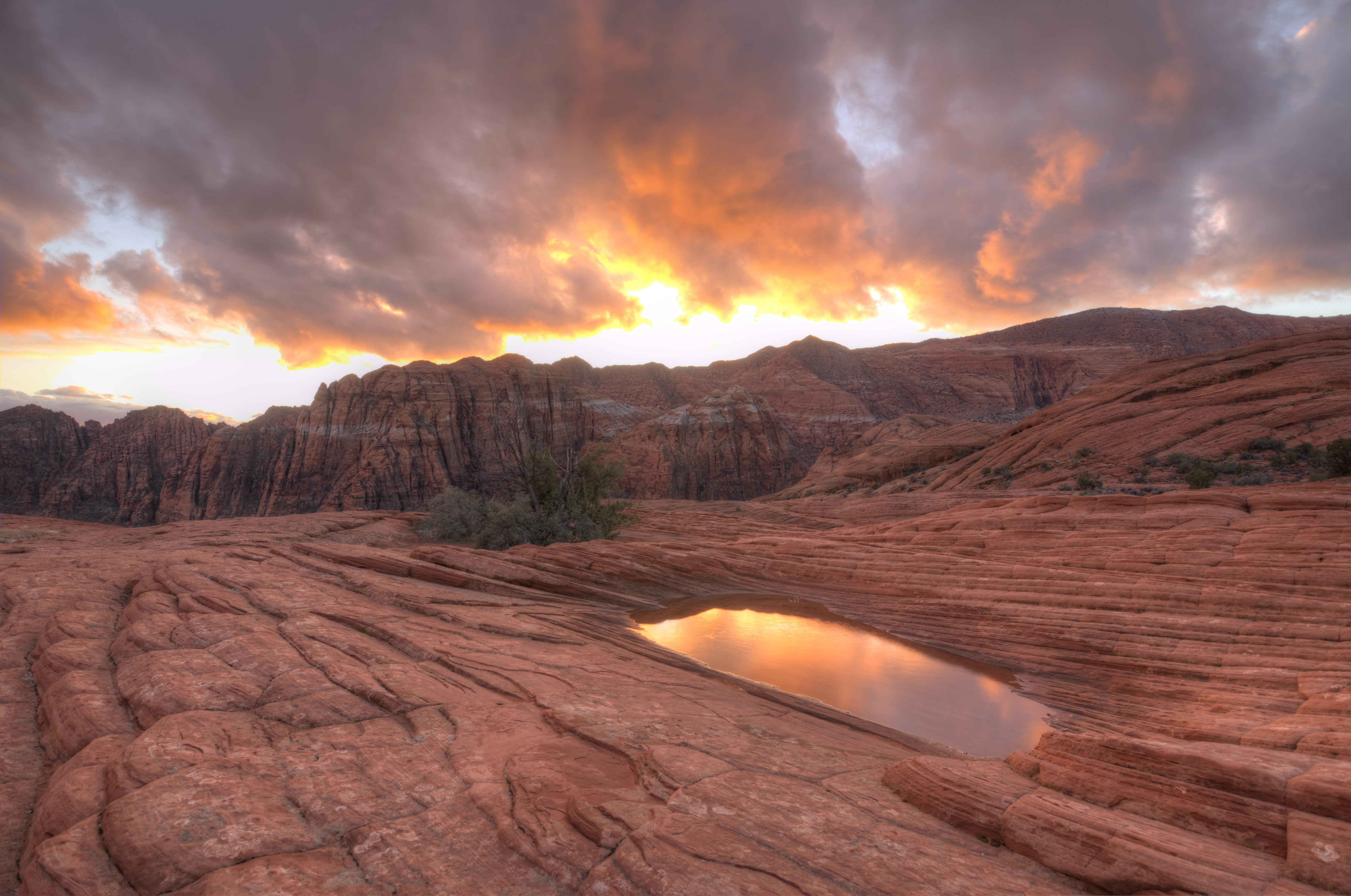 From most of western Saint George, Utah, the swirled geology of Snow Canyon State Park dominates the northern skyline. This park includes 7,400 acres of amazing landscapes, cliffs, canyons and an almost unreal amount of untraveled backcountry very close to the major metropolitan area of St. George.  Snow Canyon state park also manages sections of the surrounding Red Cliffs National Conservation Area. The 62,000 acres of the conservation area is dedicated to the conservation of the endangered  desert tortoise, and other endemic species. The combination of conservation area and state park lands make the area’s surrounding St. George an outdoor enthusiasts dream. 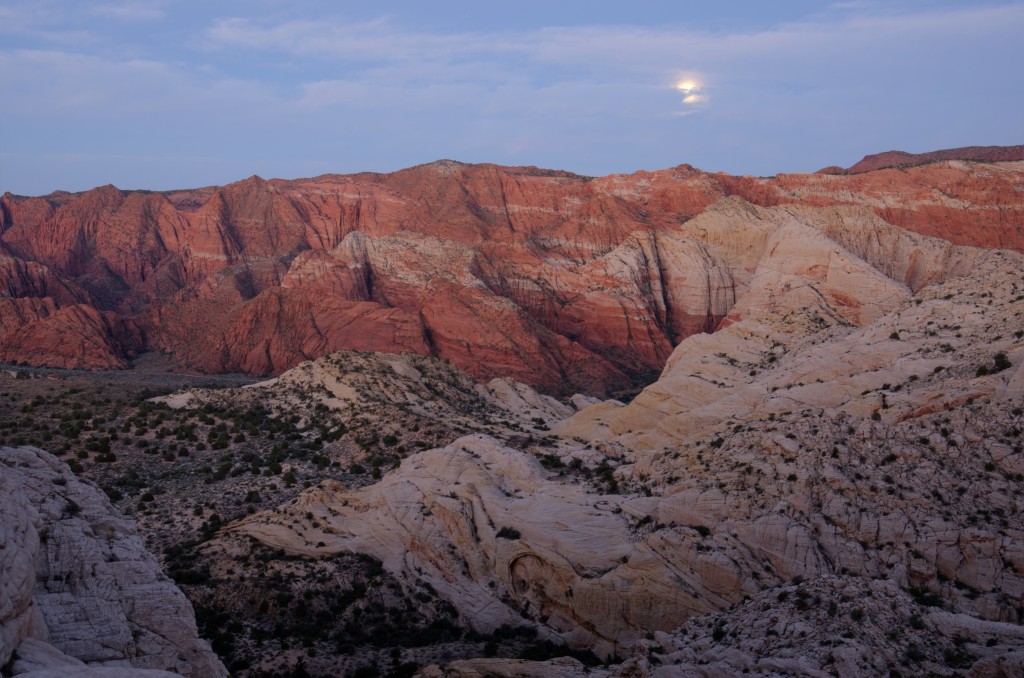 Although various bands of native Americans used this land for thousands of years,  the early pioneers to the area maintain that Snow Canyon was “discovered” while searching for lost cattle.  Cattle do tend to roam, but the marvelous swirling of red and white Navajo sandstone with ancient volcanic lava blankets flowing over the top of them, is visible from most places in the western part of town, and certainly visible from Santa Clara. “Discovery” aside the park is named after a  local pioneer: Erastus Snow, owner of the misdirected cow.

Earlier this year I had the pleasure of experiencing over 35 miles of this incredible terrain with a couple of the other guides. We first hiked through Padre Canyon, which starts at Tuacahn High School, a popular theater for the performing arts with a beautiful back drop of Navajo sandstone. After hiking to the top of this canyon, you arrive at the top of a saddle, looking down into West Canyon from the southwest. At this point, you can see the white and red sandstones in various levels of coverage by the black basalt flow of the very recent past. You are in a transitional zone of two of North America’s five deserts: the Mojave desert and the Great Basin, with plant and animal species representational of both regions. We crossed about 1-2 miles of sand, several miles of “slickrock” (Navajo Sandstone),  saw a variety of blooming wild flowers, and countless lizards. For those who know the area, we hiked from Padre Canyon to Three Ponds Trail, to Petrified Dunes Trail, to Butterfly Trail, then used the Lava Flow Trail to get to the Whiterocks Trail up to the Whiterocks Natural Ampitheater. This long day pretty much covered the entire canyon bottom, including the upper Whiterocks area which looks down on the park from the north. 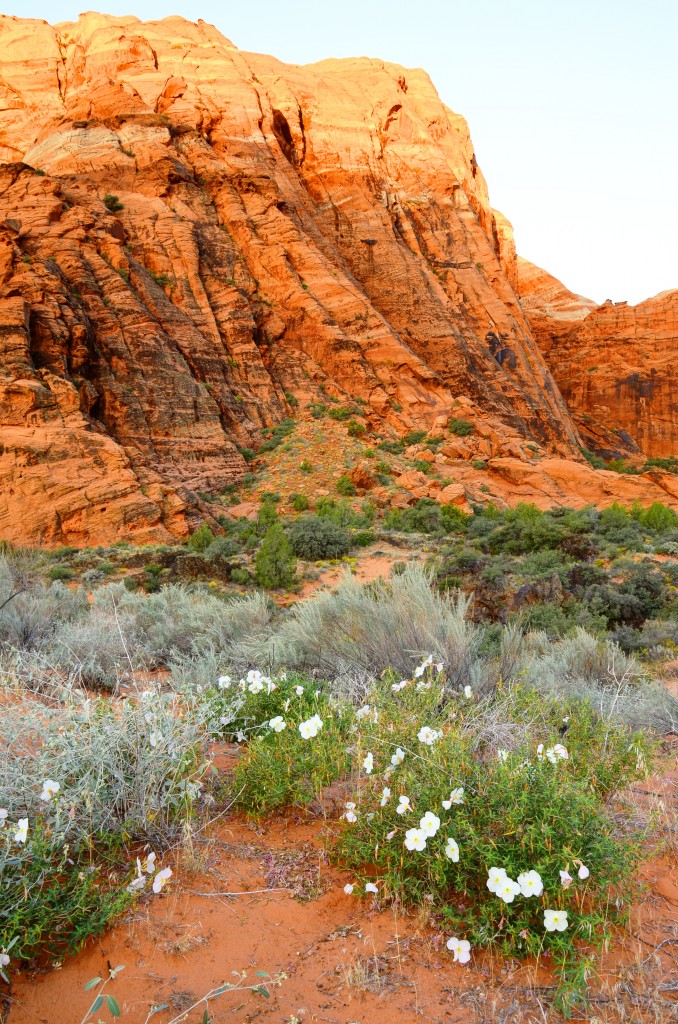 Next on the agenda was the Gila trail, which traverses the east side of the park with unrivaled views down into the park. In typical weather for spring in the desert we had bright sun, wind, rain and even hail, all over the course of a few hours.  Eventually towards the south end the trail crosses into the Red Cliffs Conservation Area, as it passes through a maze of red rock landscape with dozens of small ravines, caves and a few welcome trail markers, to confirm that we were on the established trail.  In this area we saw a number of panels filled with Native American Petroglyphs and even noticed a few pieces of broken pottery in the sand. This trail ended at Chuckawalla trailhead. This day was about 9 miles long. 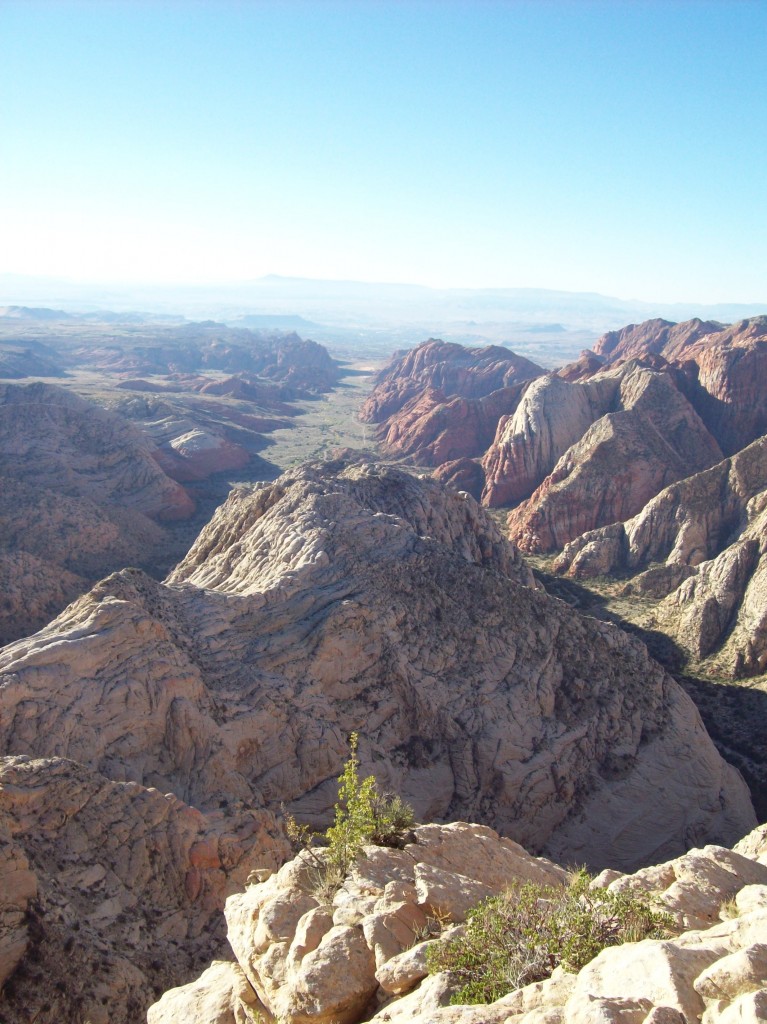 Snow Canyon from the north tip of the canyon.

The longest and toughest of these days was definitely the Red Mountain Traverse, which traverses the entire west side of the canyon. It took over an hour of uphill hiking to reach the top of the Red Mountain, often hiking through sand and even snow patches. This grueling climb of over 1,400 feet is rewarded with a grand view of Ivins, Santa Clara and Western Saint George.  At the top we headed north through miles of sand and slickrock, full of small water pockets, “Moqui marbles,” sage brush and pine trees. The Anasazi were a significant presence up here as well, as evidenced by dozens of flint-napping flakes, and likely arrowheads if we had time to look for them. At several points, we could look down on Snow Canyon from high above on its west rim. This is by far the best view of the park and some of the most un-touched land in the area, due to its remoteness. After more than ten hours and 12 miles of rough, scarcely-marked terrain, we reached the north trailhead on highway 18 where our shuttle driver awaited us. We were tired and sore and I was sun burnt, but we all agreed it was well worth the effort and pain.

These three epic day hikes offer you a view of Snow Canyon State Park from every angle. You will hike along sand, red sandstone, white sandstone, black volcanic Basalt, and see the canyon from its bottom, its east, and west rims. Early spring and Fall are the best times of year here, but even in winter, bring plenty of water. The Red Mountain Traverse is especially remote and un-marked. 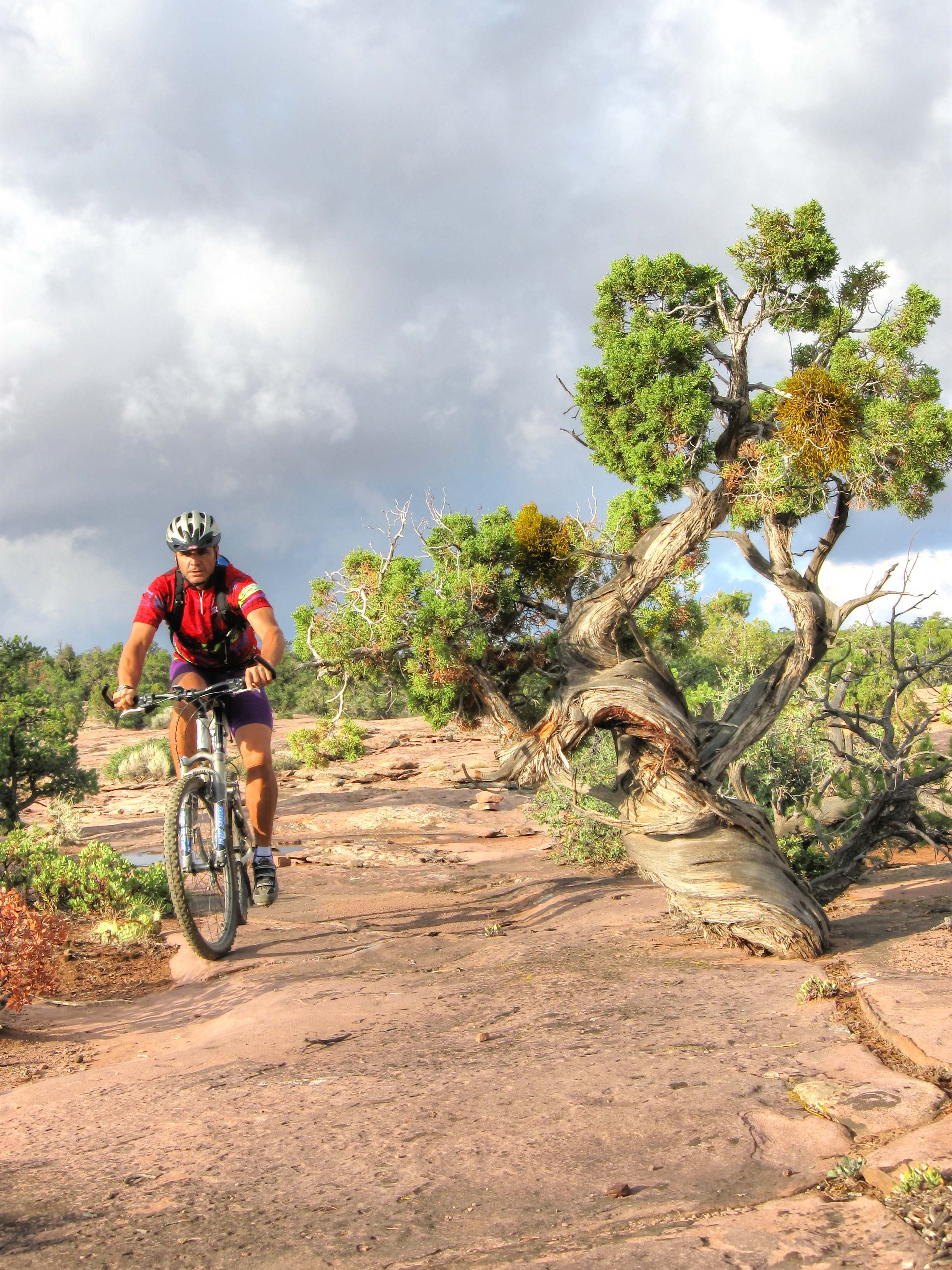