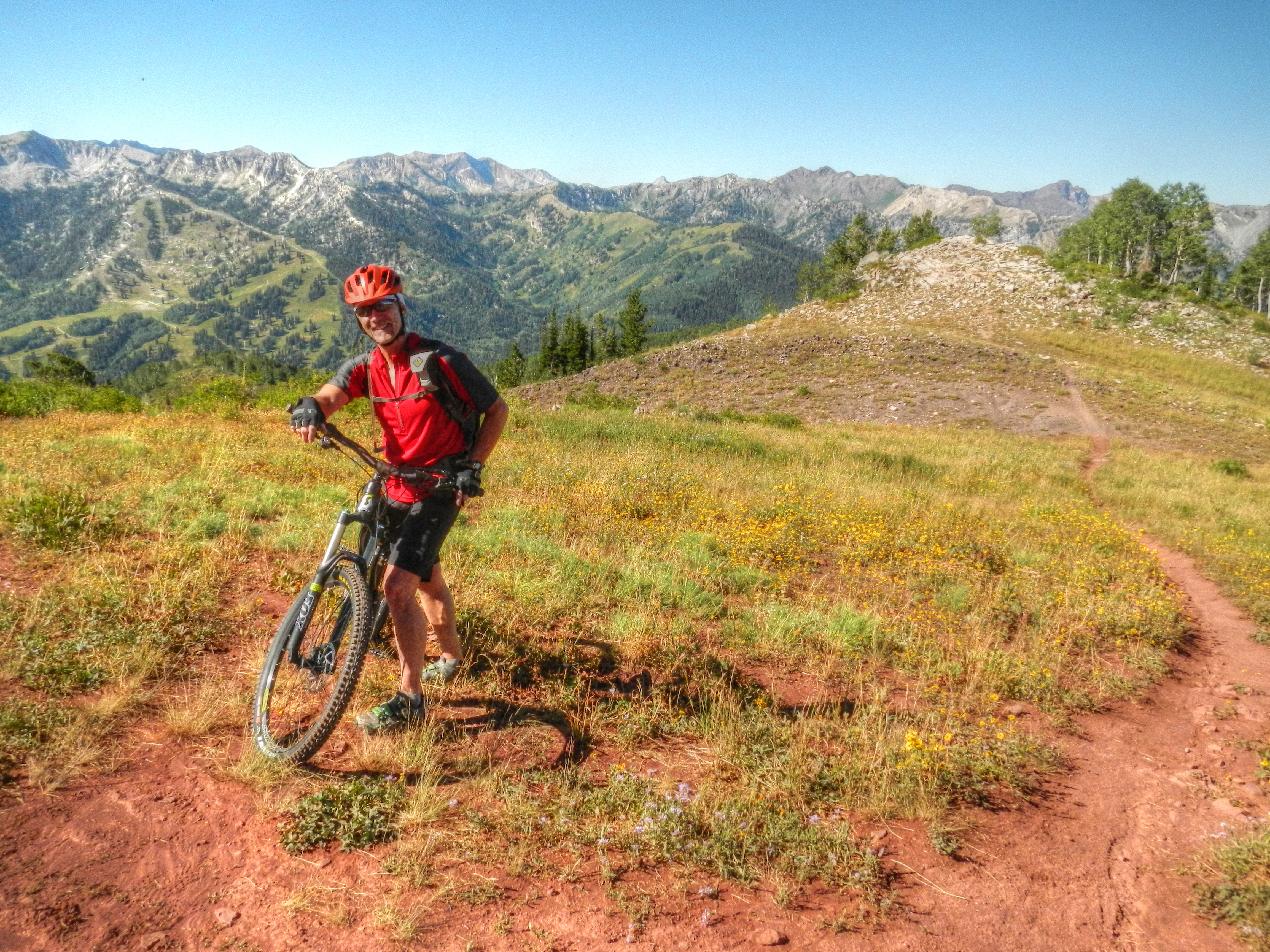 As we crept through the early morning traffic slowness heading into Salt Lake City, I could not fathom why people subject themselves to this horror on a daily basis.  “ Why do all these people live here?” I queried the other occupants of the Durango. Neither Bryan nor David had a good answer, as they had just endured a 4 hour drive over the length of the state which began for all of us at 3am. The effects of 3 cups of coffee on my nervous system had long since moved downward, and as we arrived at the pick up point for the shuttle, I hoped that my fast and purposeful stride into the Sinclair bathroom was not too obvious.

Relieved.. that we had arrived in time to unload the bikes and organize gear I was a bit surprised that the shuttle van to the top of Guardsman pass was completely full, and began to despair that this ride would be a shit show of fraudulent politeness, and disingenuous patience as we waited for masses of other bikers to pass us or move off the trail. Yet upon arrival at the 9000 foot elevation pass the vibe was more supportive and the numbers far fewer than I had imagined. We got a bit of beta from one of the locals and followed as they disappeared into the thick forest trail to the left of a gravel road.

The first 5 minutes of riding Scott’s bypass was worth the 5 hours of travel. Twisting turning downhill swoops of tacky dirt through the trees grabbed our attention and gave it a good shake. I could imagine the pure joy that riding this bit must be like with a little foreknowledge, and not on-sight with every twist and turn being a new experience. I could imagine the sense of connection with the contour, and the flow through the trees being nearly spiritual… Thanks Scott, whoever you are.

Puke hill is aptly named. As we started the climb on the graveled road I seriously contemplated what the Maverick breakfast burrito would look like on the side of the trail, the thought alone kept it down and me pedaling. Bryan and David were far ahead seemingly unaware that we were riding up a steep hill at 10,000 feet, or at least that is what their speed seemed to indicate. My focus at that point was on not embarrassing myself by walking the bike up the final 100 vertical feet that they had apparently floated, without effort.  While it is true that I am older than both of their fathers, that fact is only to be used as an ultimate last resort, moments before the stroke that kills me, to salvage the final vestige of my honor. I simply could not breath harder, or deeper,.. and it was close to being not enough.  You know when you are at your aerobic limit when you can’t spare the breath to spit, and drool just dribbles down your chin. The question that crosses your mind at that point is ”spit and pass out, or just look like a demented old man?”  Go with the latter, and try to redeem yourself later.

At a certain point in life you never really catch your breath, and so as we started back uphill it didn’t seem unusual to be back to sounding like a vaguely pissed off asthmatic locomotive within a few feet, but the trail soon enough flattened out and turned back into what must be some of the most stunning single track in the country. I am completely unsure of how good the riding was over the next few miles. I recall a few hills that required some toil, but otherwise the combination of buttery smooth trail, sweet swoopy flow and “Song of Music” views combined to create a sense of bliss that I have never had the opportunity to experience on any other trail. 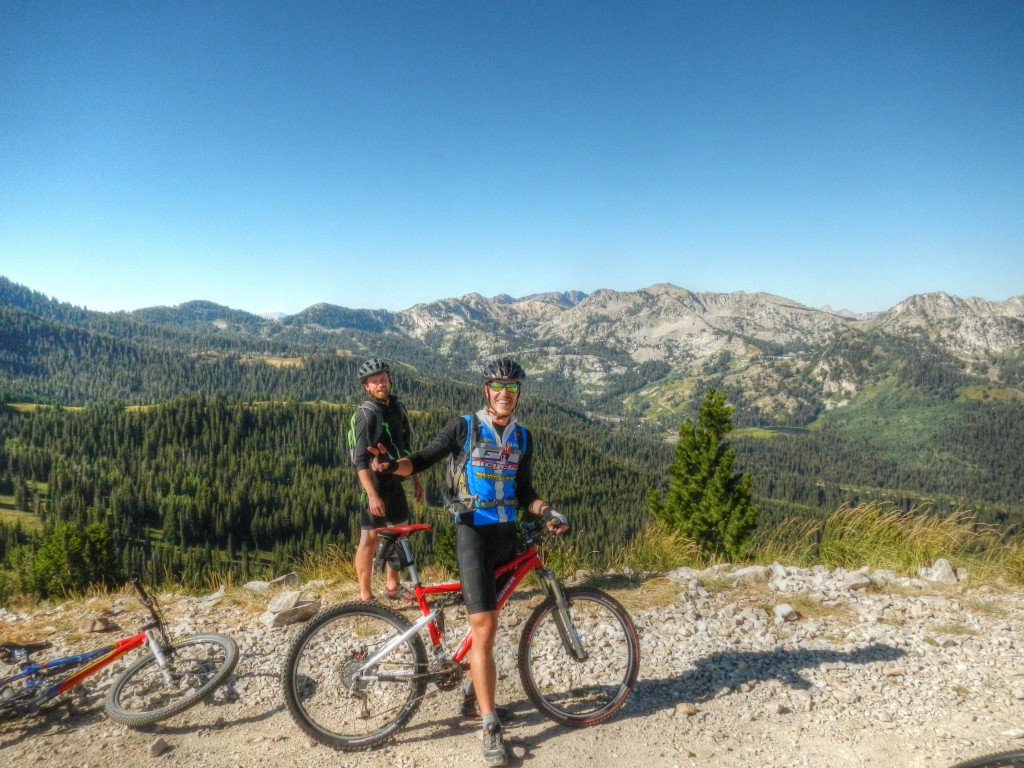 Bryan (right) and David (left) on the Wasatch Crest Trail.

As we approached “the spine” I passed David just standing up from what must have been a spectacular digger. I had discovered earlier in the ride that even minor variations from the trail here are met with unexpected violence, and an advanced course in particle physics.  David had just received his doctorate, and after checking his intactness I rushed to join Bryan at the spine.

We had received some beta about the best line being to the left, and though it looked really ride-able, neither Bryan or I felt any guilt in walking down the scary bits, as this would not be a good place for a broken bone.  The phrase “pride goeth before the fall” seemed quite pertinent at that point of the ride.

As we watched David ride/walk down the spine my eye seemed to find something wrong with the scene, it was as if I was watching  it reflected through a fun house mirror somehow.  Some things that should have been straight lines were wobbly, wavy and moving in unexpected directions… especially his front wheel.

After a brief attempt with a spoke wrench it became obvious that we needed to fight violence with violence and I began to beat the warped rim against a flat rock interrupted by brief evaluations of the effects as Bryan suggested where to bash it next. The riders who passed us seemed completely unfazed by someone beating a wheel against a rock, and in fact applauded our ingenuity and resourcefulness, which made me realize how little removed from the stone age we really are.  Since we didn’t have to ride it, Bryan and I eventually decreed that the wheel was straight enough, and with about 1/3 front brake power David sucked it up and played the hand that he was dealt, and we continued down towards the now visible city in the distant haze.

The second half of the ride is somewhat of a blur for me. Endless, smooth, twisty trail diving through spruce and fir, aspen and alder. Relentlessly down, incessantly twisting, roots and rocks an unexpected relief to the smooth sticky dirt that seemed to grab at the treads and hold the tires to the planet despite any ideas that gravity or inertia had in mind.

We dove down through Mill Creek canyon and began to encounter bikers heading up, and hikers with dogs and so slowed our headlong fall out of the mountains in favor of a more measured and cautious pace that was still as fun as hell. It seemed endless, I have never knowingly wished that a downhill would end, but here I actually began to have fond recollections of the easier uphills and flat sections where you actually had the choice of whether to pedal or not. I remembered being able to feel my hands.

Suddenly there was pavement, cars, dogs, hikers and regrouping mountain bikers.  We chatted with some of the locals who were friendly and seemed genuinely happy that we had a good experience. As we began down the canyon and I reflected on what a spectacular ride the trail was I was struck by the realization….

This is why they live here.