Many people who know very little, or even nothing, about the southwest, have at least heard of the Anasazi. This name usually conjures up images of stone dwellings built in a cave high up on an unreachable cliff face, or the image of the flute-playing Kokopelli. These people left much more than petroglyphs and cliff dwellings. As a farming culture, they could support a large population, which, as a result, leaves a lot of evidence behind. Though centered in the four corners region of the US, they spread as far west as Lake Mead, leaving a plethora of artifacts and petroglyphs in the St. George area of Utah. From approximately Zion National Park to the western edge of their territory, they are called the Virgin Anasazi by archaeologists.

When the first humans inhabited the Americas roughly 12,000 years ago (some believe as long as 20,000+ years ago), North America was colder and wetter and had a healthy population of large mammals like mammoths, giant sloths and stag moose along with many others. People hunted these walking feasts until their extinction (known as the Pleistocene Extinction). It is debated whether their extinction was due to environmental change, over-hunting, or a combination of both these factors. Regardless of why or how it happened, the loss of their main food source along with a warmer, drier environment required a new way of life. This next culture of foragers and hunters of smaller game, who lived semi-nomadically in this region for thousands of years from about 7,000BC-500BC, have been named the “Desert Archaic.” 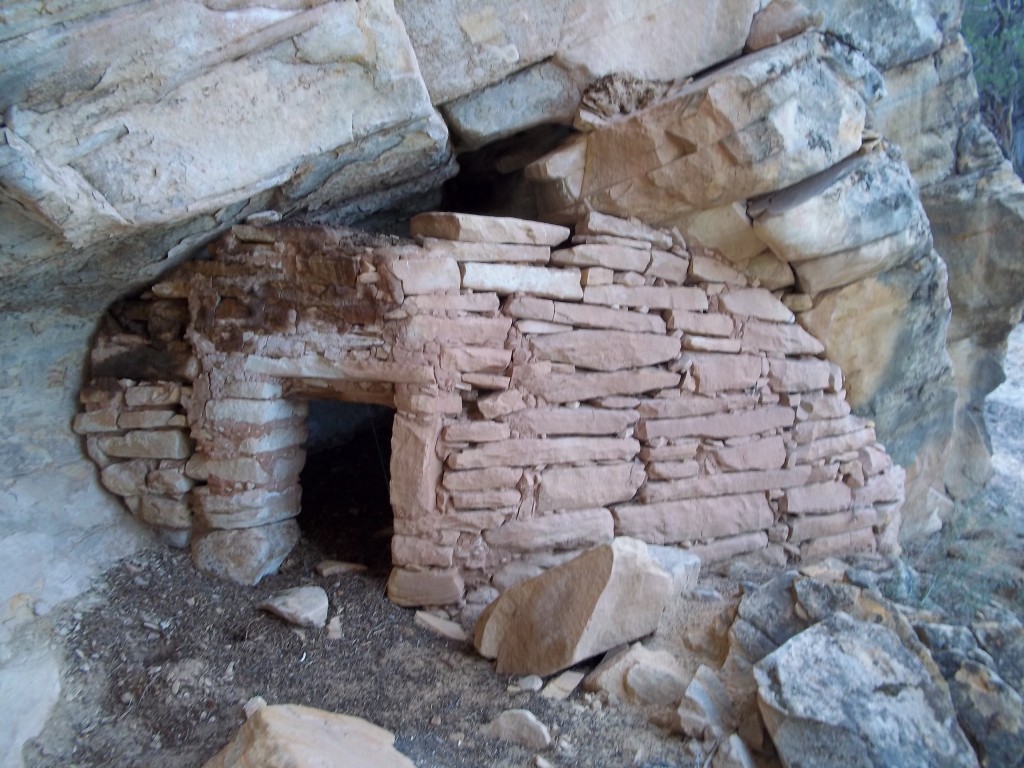 Anasazi Food granary near Blanding, UT. the door is only about 2-3″ tall. It was designed for food storage, not as a dwelling.

At some point around 500 BC, the people in the Southwest began farming their food. How this began is debated and cannot be proven as of yet, but there are only two possibilities: they discovered it on their own, or the method/idea was adopted from other tribes. They grew mostly corn, beans and squash, but also farmed many other local plants and tobacco. These people still foraged and hunted, but relied heavily on their farmed foods, which allowed them to support a large population. One of the methods they used was to store excess food in granaries, to use in harsher times, like winter. These granaries were built of sandstone with clay as a cement. In many of these structures, the clay was pushed into some of the cracks between rocks with their fingertips and their finger prints are still visible in them today. They were sealed well enough to keep rodents out. Some of these were even constructed in very inaccessible cliff ledges and alcoves, leaving us to wonder how they even got up there, let alone, how they brought up supplies and built structures in these spots. Evidence of their farming lifestyle can be found all over the St. George area, from food granaries in Zion National Park to small, ancient corn cobs gathered by pack rats and dragged under boulders to build their dens. 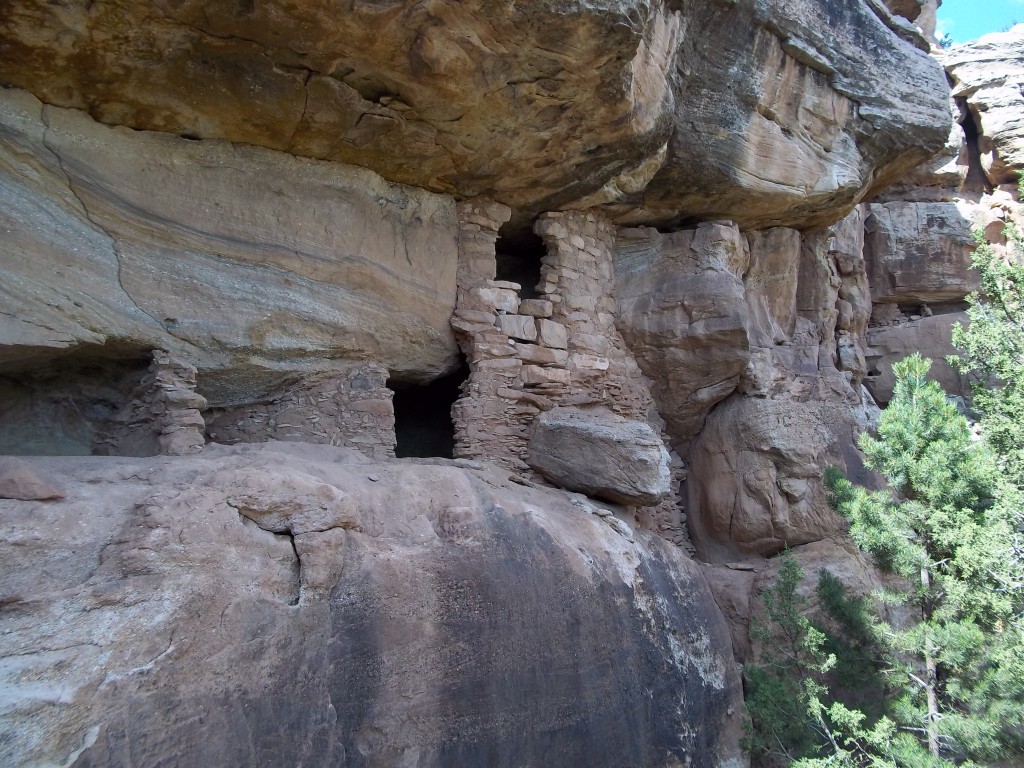 Though the Anasazi are well-known for their impossible-to-reach rock-built shelters and the multi-room apartment style city of Chaco canyon in New Mexico and Mesa Verde in Colorado, these are mostly evidence from the latter period of this population’s 1,800 year span. Their shelters evolved from large, buried, basement-style, single room community dwellings, called Kivas. It is commonly believed were only used for religious ceremonies and gatherings at first, but were then adopted as community shelters. Later, rock and clay homes, complete with food storage compartments were built on the surface and underground, often overlooking the rivers they were farming. This was probably advantageous to protecting your crops from animals and neighbors. Also, people often choose not to live on canyon floors, as they can be extremely cold because the sun only reaches the bottom of these narrow canyons that are characteristic of this region but a few hours a day. 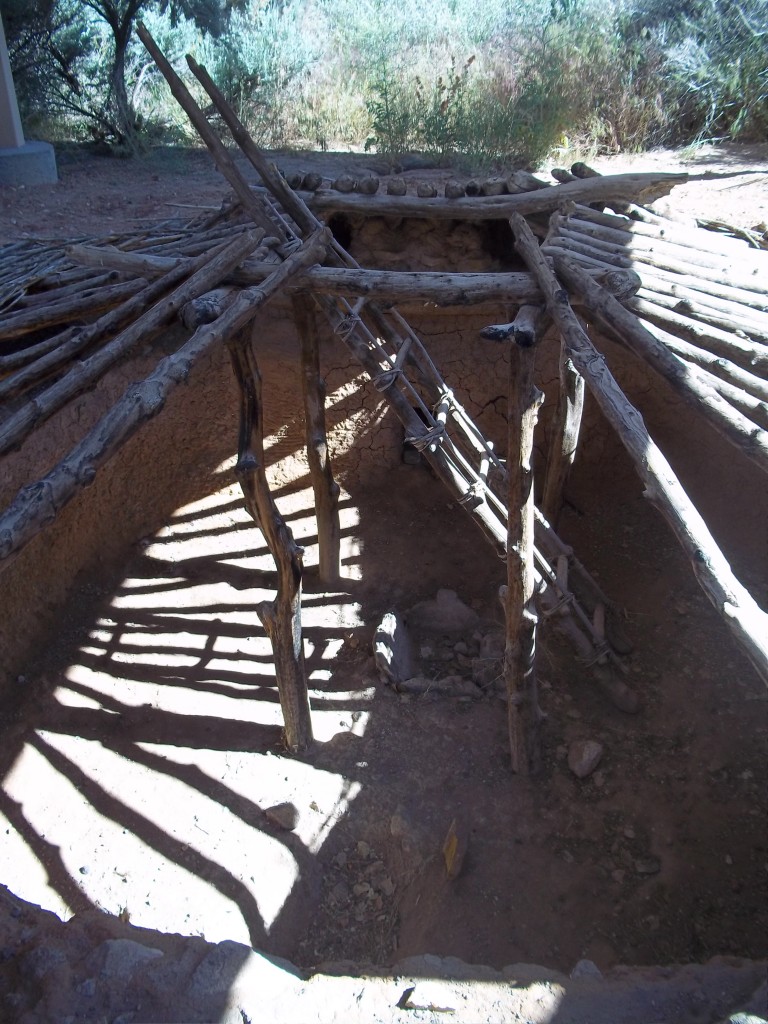 From approximately 1100-1300 AD, the hard-to-reach cliff dwellings of the four corners area and southeastern Utah began to appear. Some of these dwellings were even equipped with narrow-slotted windows that are wider on the inside of the window: a method used in medieval times to allow archers a wide range of aim, without leaving a wide opening for enemies’ arrows to enter. The archer-friendly windows, along with the hard-to-access placement of these dwellings, implies a need for defense. Add to these strategically-placed boulders on the edge of cliffs, staged so that if rolled off the edge, they would hit the path that leads to the dwelling, and you have a native American fortress. Why would people need to live this way unless there was a threat? By the 1100’s, the Anasazi had already began to abandon the St. George area, so Washington County lacks much of the evidence of this later period. 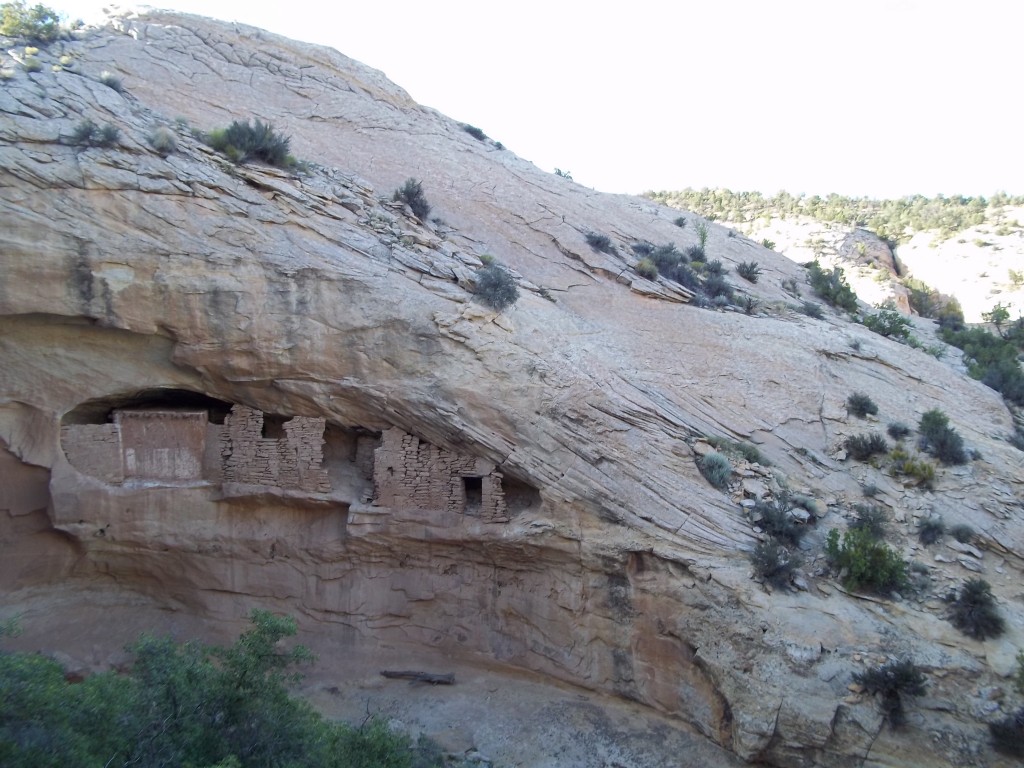 Anasazi Cliff Dwelling near Blanding, UT. This site is unreachable without a ladder or technical equipment. 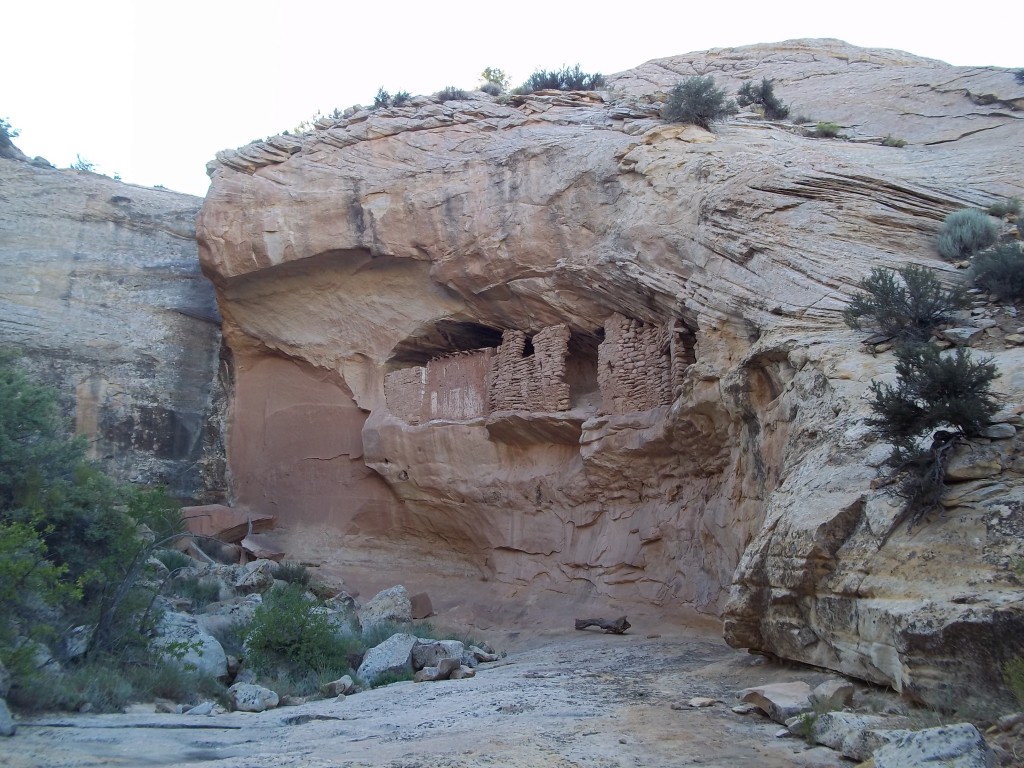 The same Anasazi Cliff Dwelling near Blanding, UT. there are two shallow holes at the base of the cliff, located exactly where one would place a ladder, as the rock below this dwelling is unclimbable.

A large population leaves more evidence than a small population. The Anasazi were large enough to successfully spread hundreds of miles. As a result, they left more art behind. Petroglyphs and pictographs (please click the links to learn what these terms mean) were left all across the southwest and St. George Utah is surrounded by them. The Anasazi left many different symbols and depictions of people and animals. Common Anasazi rock art symbols include the desert big horn sheep, animal and human foot prints, stars and people. It is believed that the famous flute-playing icon: Kokopelli started to appear in people’s rock art of the southwest around the Anasazi’s period. Evidence of ceramic flutes litter the four corners area’s river banks and dwelling sites. Other forms of instruments were likely used as well. Many of the ceramic plates, pots and tools left behind are a grey-white color with black designs painted on them. Some archaeologists spend hours carefully putting these shattered works piles of pottery back together to reveal a detailed work of art. These ceramic pots and tools were made from clay from local river beds, mixed with crushed stone and baked in sandstone kilns. Some of these kilns are still standing and visible today very close to the I-15 freeway. 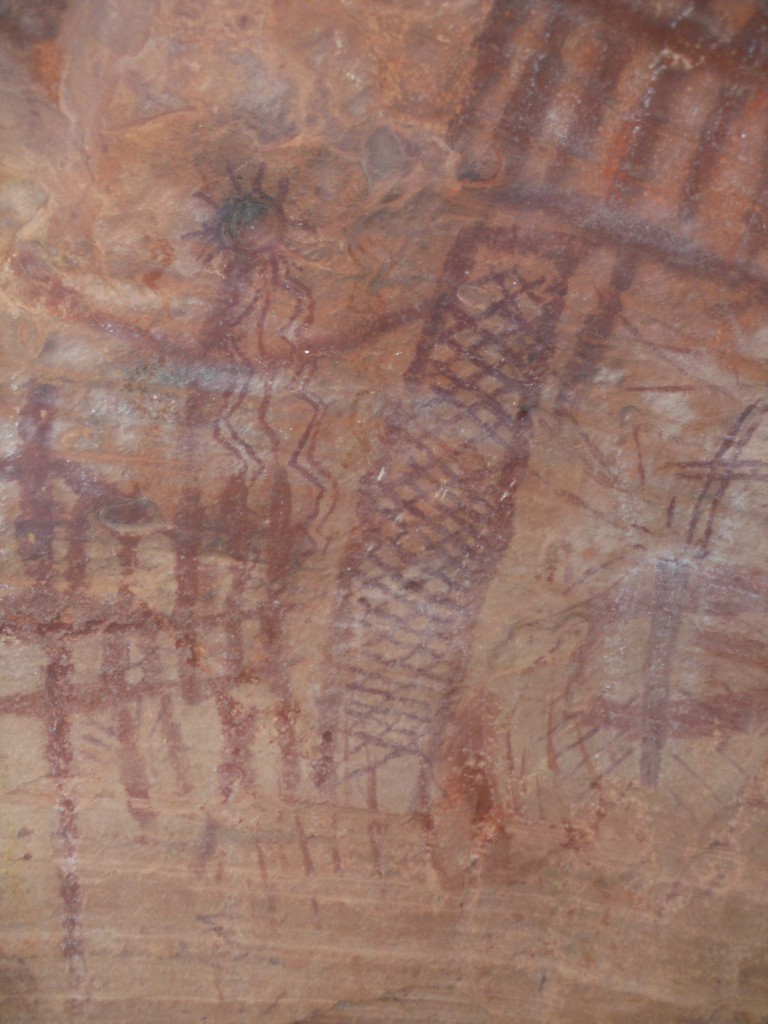 Petroglyphs and pictographs in a cave near Saint George Utah.

These people are not alive today to tell us whether they were a huge, unified tribe with kings and laws, or if they simply lived just like their neighbors and made similar art. Archaeologists have looked for trends in the types of evidence they left behind. So archaeologists give names to their cultural characteristics. When they found these styles and types of artifacts repeated in the southwest for a long period of time, they named these similar culture traits the Anasazi. This name came from the modern day Navajo language, and means “ancient enemy people.” This implies a negative clash between these cultures. Though these two very different cultures may have never even met, many believe there could have been a period of conflict, war or even genocide that led to this name. The negative impression given by this name has resulted in its being officially changed to the “Ancestral Puebloans.” “Anasazi” is still commonly used though because many people still have not yet caught on to the new name and would not even know who the Ancestral Puebloans are. In central Utah, the northern neighbors of the Anaszi lived very similarly to them. They even dispersed/disappeared around the same time as the Ancestral Puebloans. They had enough differences with their neighbors though, that the archaeologists named them differently. They are called the Fremont. In the Virgin Anasazi’s area, by the time they dispersed, their northern neighbors were the Paiute tribe. They were mainly foragers and hunters and shared little in common with the Ancestral Puebloans, but are believed to have adopted some farming methods from them, implying a peaceful or even helpful transition from one culture to the next.

The biggest allure of the Ancestral Puebloan story is their “disappearance” in the 1100’s in the Virgin Anasazi region and the 1300’s elsewhere. It is not certain exactly why they abandoned the area after more than 1,000 years, but several factors likely all contributed to the culture’s demise. They are: drought, over population, and mismanagement of water and tree resources. The southwest was a wetter environment when the Anasazi began to farm it. The thickness of growth rings in trees from this era show us exactly which years were drier. The thinner the growth ring, the drier the year was. This method has revealed that a series of droughts occurred during the latter decades of their span. For a farming-dependant society, drought means you cannot produce enough food to feed a large population. They are then forced to forage for their food and may have had to travel far to do so, especially if they had deforested their local home. The evidence shows that many Anasazi territories were in fact deforested. Some trees used to build Chaco Canyon’s apartment-style complexes were proven to have come from up to two hundred miles away. No one does this for fun. This was due to the fact that all their local trees had already been used. Also, of the many things dragged into the dens of pack rats, plant materials were the most common. Scientists have picked many of these dens apart and found tree materials in them dated to be from early Anasazi times. In the latter part of this fossil record, they found evidence of smaller trees, then none in some areas. Whether or not they were responsible for this deforestation is yet to be proven, but the fact remains that the trees diminished and that can drastically slow down the growth of a people known for building. As farmers, water was life. They dug irrigation ditches to divert water to their crops and even built small reservoirs. Though helpful, some of these ditches were slowly eroded by the water flow until they were cut down so low that the roots of their crops could no longer reach the water. With all these things going wrong, plus the possibility that neighbors may have wanted to take this land, it is no wonder that these people found a new way of life and even traveled far to join other tribes who had more fertile land, or who depended more on foraging and hunting than on farming.

Here at Paragon Adventures, we are proud to be able to guide you through some amazing sites full of evidence from these people, from petroglyphs and pictographs to the remnants of an ancient pueblo home. We are developing a petroglyph tour program, but it is not on our website yet. Contact us to schedule a private guide to take you to some of these places.